Sammy Keyes and the Showdown in Sin City 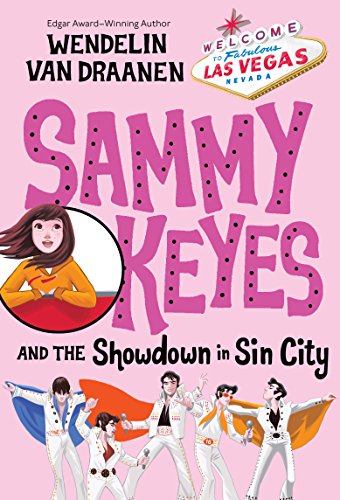 Praise for the Sammy Keyes series:

"Van Draanen offers such an explosive combination of high-stakes sleuthing, hilarity, and breathlessly paced action that it's impossible to turn the pages fast enough." --Kirkus Reviews

"A high-quality, high-amp mystery series." --The Horn Book "This funny, clever series is NOT for kids only. I challenge the most seasoned mystery reader to guess 'who done it.'" --Cozies, Capers, and Crimes "Sammy Keyes comes armed with attitude." --Orlando Sentinel "Sammy doesn't find mysteries to solve--they find her." --Arizona Republic "Humor, romance and adventure; this story is an absolute blast." --Chicago Tribune "If you haven't met Sammy Keyes yet, now is the time." --Children's Literature Rese±a del editor:

In this pivotal book in the Sammy Keyes series, Sammy tackles the persistent mysteries of her own life. Mysteries like: Who is her father? And why has her mother kept it such a secret? How long can she manage to hide out in Grams' seniors-only building before someone catches on? Is her mother really planning to marry her boyfriend's father? (Ew.) And why, why is Heather Acosta so nasty?

During one crazy weekend in Las Vegas, with the help of an entire army of Elvis impersonators, Sammy finally gets some answers. But of course knowledge comes at a price—and solving the mysteries of her own life will cost Sammy more than she ever meant to pay. . . .

The Sammy Keyes mysteries are fast-paced, funny, thoroughly modern, and true whodunits. Each mystery is exciting and dramatic, but it's the drama in Sammy's personal life that keeps readers coming back to see what happens next with her love interest Casey, her soap-star mother, and her mysterious father.