Verwandte Artikel zu Dare to Prepare: How to Win Before You Begin

Shapiro, Ronald M. Dare to Prepare: How to Win Before You Begin

Dare to Prepare: How to Win Before You Begin 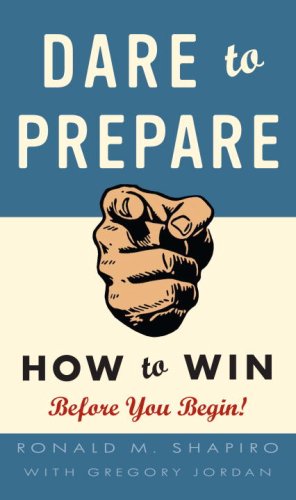 Draws on a series of practical, real-life stories of individuals from all walks of life to demonstrate the significance of old-fashioned preparation in modern-day success, examining the importance of research, practice, and discipline in the lives of Robert Parker, Cal Ripkin, Lisa Fontenelli, and others as they deal with a variety of personal or professional challenges. 50,000 first printing.

RONALD M. SHAPIRO, cofounder of the Shapiro Negotiations Institute, was called “one of baseball’s most respected agent attorneys by USA Today and has represented a record five Major League Baseball Hall of Famers. He has been recognized by Smart CEO as one of its “Twenty Most Admired Leaders,” and The Sporting News also named him one of the “100 most powerful people in sports.” Ron is the coauthor of The Power of Nice and Bullies, Tyrants, and Impossible People.

GREGORY JORDAN is a writer from Baltimore. His articles have appeared in the New York Times, The Hill, and Crisis magazine.