Fire and Forget: Short Stories from the Long War 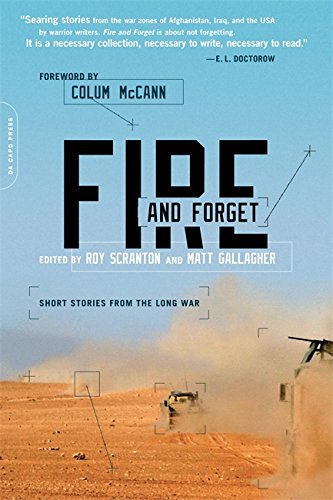 Fire and Forget includes the title story from Redeployment by Phil Klay, 2014 National Book Award Winner in FictionThese stories aren't pretty and they aren't for the faint of heart. They are realistic, haunting and shocking. And they are all unforgettable. Television reports, movies, newspapers and blogs about the wars in Iraq and Afghanistan have offered images of the fighting there. But this collection offers voices- powerful voices, telling the kind of truth that only fiction can offer.What makes the collection so remarkable is that all of these stories are written by those who were there, or waited for them at home. The anthology, which features a Foreword by National Book Award winner Colum McCann, includes the best voices of the wars' generation: award-winning author Phil Klay's Redeployment" Brian Turner, whose poem Hurt Locker" was the movie's inspiration Colby Buzzell, whose book My War resonates with countless veterans Siobhan Fallon, whose book You Know When the Men Are Gone echoes the joy and pain of the spouses left behind Matt Gallagher, whose book Kaboom captures the hilarity and horror of the modern military experience and ten others.

1. Fire and Forget: Short Stories from the Long War