Crosby, Stills, and Nash: The Biography: 0 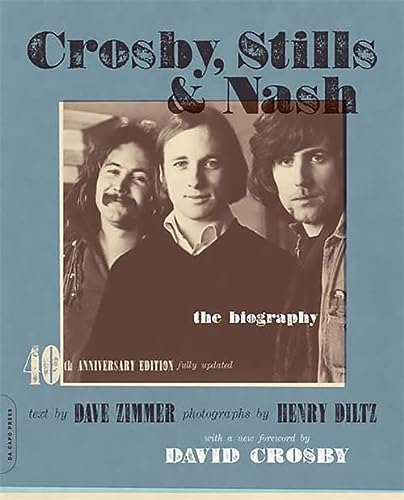 Augusta Metro Spirit, 10/1/08 "An expansive volume complete with a wonderful collection of photographs...A wonderful companion for fans of the iconic trio...This work opens the doors to the backstage area of the legend of Crosby, Stills and Nash while providing the framework and the excitement of the union of these three with Neil Young...A delightful piece of music history." Blogcritics.org, 10/6/08 "Although it is immediately clear in Zimmer's narrative that he is not only a confidant, but a fan as well, none of the details-including many that the band members themselves would probably rather forget-are left out...Still, and to Zimmer's credit, [it] never reads in the sort of lurid fashion which often characterizes other rock bios from the same era...[Zimmer has] an engaging and easy-to-read, matter-of-fact style that literally puts the reader right there. For both CSN&Y fans and students of American music history, [this] is an essential read." "Neil Young News" blog on Thrasherswheat.org, 10/10/08 "Mighty fine reading and viewing that any CSN fan-and even Neil Young fans-could appreciate." InfoDad.com, 10/30/08 "Amply illustrated...A well-organized book...Fans of this group...will be thrilled by the inside information."

Crosby, Stills & Nash created some of the most indelible songs and beautiful harmonies of the late 1960s and early 1970s: Suite: Judy Blue Eyes," Woodstock," Teach Your Children." This copiously illustrated account of the trio's personal and musical history tells the story behind the songs. Longtime CSN chronicler Dave Zimmer, with the full cooperation of the band, traces all of the performers from their musical roots to their first song together in L.A.'s storied Laurel Canyon from their addition of Neil Young to Woodstock and through their stormy years of creative conflicts, reunions, and reconciliations. This new edition has been fully reconfigured and updated to celebrate the trio's 40th anniversary and to accommodate over 300 photos, as well as Crosby, Stills, Nash & Young's controversial Living with War tour.