Verwandte Artikel zu When Britain Saved the West: The Story of 1940

Prior, Robin When Britain Saved the West: The Story of 1940

When Britain Saved the West: The Story of 1940 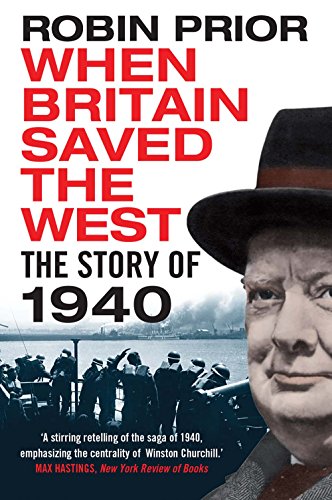 How Britain, standing alone, persevered in the face of near-certain defeat at the hands of Nazi Germany From the comfortable distance of seven decades, it is quite easy to view the victory of the Allies over Hitler's Germany as inevitable. But in 1940 Great Britain's defeat loomed perilously close, and no other nation stepped up to confront the Nazi threat. In this cogently argued book, Robin Prior delves into the documents of the time-war diaries, combat reports, Home Security's daily files, and much more-to uncover how Britain endured a year of menacing crises. The book reassesses key events of 1940-crises that were recognized as such at the time and others not fully appreciated. Prior examines Neville Chamberlain's government, Churchill's opponents, the collapse of France, the Battle of Britain, and the Blitz. He looks critically at the position of the United States before Pearl Harbor, and at Roosevelt's response to the crisis. Prior concludes that the nation was saved through a combination of political leadership, British Expeditionary Force determination and skill, Royal Air Force and Navy efforts to return soldiers to the homeland, and the determination of the people to fight on "in spite of all terror." As eloquent as it is controversial, this book exposes the full import of events in 1940, when Britain fought alone and Western civilization hung in the balance.

Robin Prior is professor of history at Flinders University, Adelaide, and author of six previous books. He lives in Adelaide, Australia.