Verwandte Artikel zu Life as Surplus: Biotechnology and Capitalism in the...

Cooper, Melinda E. Life as Surplus: Biotechnology and Capitalism in the Neoliberal Era (In Vivo: The Cultural Mediations of Biomedical Science)

Life as Surplus: Biotechnology and Capitalism in the Neoliberal Era (In Vivo: The Cultural Mediations of Biomedical Science) 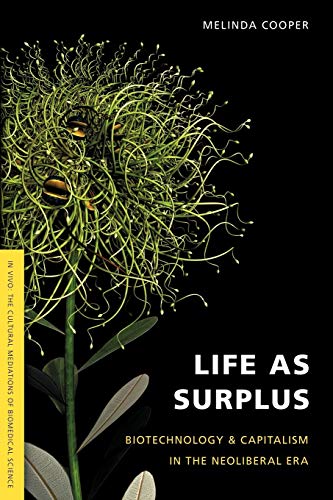 Life as Surplus is interesting, and examines some of the fundamentals of science practice. . .Well written, a nd well documented. Useful for professionals and for academic coursework on science and society. Recommended. * Choice * A fascinating study of speculative impulses that serve as the foundation of increasingly commercialized life sciences. * Book News * Melinda Cooper's forceful Life as Surplus is a political economy of the exploitation of life in the biotech era that exposes the modes of re/production attuned to late twentieth-century neoliberal capitalism..Cooper's brilliant and inventive mapping of prevailing contemporary biopolitical imaginaries is precious. * Biosocieties *

Focusing on the period between the 1970s and the present, Life as Surplus is a pointed and important study of the relationship between politics, economics, science, and cultural values in the United States today. Melinda Cooper demonstrates that the history of biotechnology cannot be understood without taking into account the simultaneous rise of neoliberalism as a political force and an economic policy. From the development of recombinant DNA technology in the 1970s to the second Bush administration's policies on stem cell research, Cooper connects the utopian polemic of free-market capitalism with growing internal contradictions of the commercialized life sciences. The biotech revolution relocated economic production at the genetic, microbial, and cellular level. Taking as her point of departure the assumption that life has been drawn into the circuits of value creation, Cooper underscores the relations between scientific, economic, political, and social practices. In penetrating analyses of Reagan-era science policy, the militarization of the life sciences, HIV politics, pharmaceutical imperialism, tissue engineering, stem cell science, and the pro-life movement, the author examines the speculative impulses that have animated the growth of the bioeconomy. At the very core of the new post-industrial economy is the transformation of biological life into surplus value. Life as Surplus offers a clear assessment of both the transformative, therapeutic dimensions of the contemporary life sciences and the violence, obligation, and debt servitude crystallizing around the emerging bioeconomy.