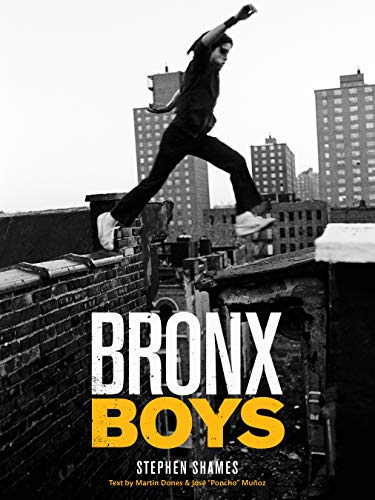 "The Bronx has a terrible beauty, stark and harsh, like the desert. At first glance you imagine nothing can survive. Then you notice life going on all around. People adapt, survive, and even prosper in this urban moonscape of quick pleasures and false hopes. . . . Often I am terrified of the Bronx. Other times it feels like home. My images reflect the feral vitality and hope of these young men. The interplay between good and evil, violence and love, chaos and family, is the theme, but this is not documentation. There is no story line. There is only a feeling."-Stephen Shames A 1977 assignment for Look magazine took Stephen Shames to the Bronx, where he began photographing a group of boys coming of age in what was at the time one of the toughest and most dangerous neighborhoods in the United States. The Bronx boys lived on streets ravaged by poverty, drugs, violence, and gangs in an adolescent "family" they created for protection and companionship. Shames's profound empathy for the boys earned their trust, and over the next two-plus decades, as the crack cocaine epidemic devastated the neighborhood, they allowed him extraordinary access into their lives on the street and in their homes and "crews." Bronx Boys presents an extended photo essay that chronicles the lives of these kids growing up in the Bronx. Shames captures the brutality of the times-the fights, shootings, arrests, and drug deals-that eventually left many of the young men he photographed dead or in jail. But he also records the joy and humanity of the Bronx boys, who mature, fall in love, and have children of their own. One young man Shames mentored, Martin Dones, provides riveting details of living in the Bronx and getting caught up in violence and drugs before caring adults helped him turn his life around. Challenging our perceptions of a neighborhood that is too easily dismissed as irredeemable, Bronx Boys shows us that hope can survive on even the meanest streets.

STEPHEN SHAMES is author of seven previous books, including Outside the Dream: Child Poverty in America, which won the Kodak Crystal Eagle Award for Impact in Photojournalism, and The Black Panthers. His images are in the permanent collections of the International Center of Photography, the National Portrait Gallery, the Museum of Photographic Arts, and the Museum of Fine Arts, Houston. Shames has been profiled by People magazine, CNN, CBS Sunday Morning, Esquire, US News, NPR, the Wall Street Journal, Time, and Photo District News. He lives in Brooklyn, New York.