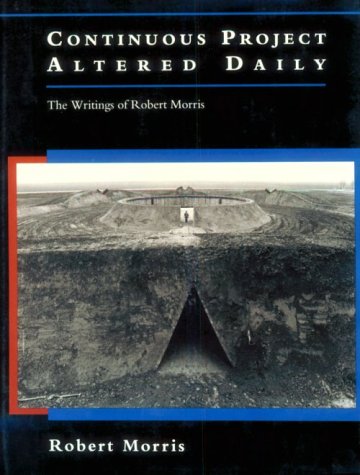 Robert Morris is best known for his significant contributions to minimalist sculpture and antiform art, as well as for a number of widely influential theoretical writings on art. Illustrated throughout, this collection of his seminal essays from the 1960s to the 1980s addresses wide-ranging intellectual and philosophical problems of sculpture, raising issues of materiality, size and shape, anti-illusionism, and perceptual conditions. Included are "Notes on Sculpture," which in four parts articulates the shifting terrains of sculpture during the 1960s, tracing its movement from the gestalt-driven unitary forms of minimalism, through permutable pieces, to the formally dispersed process-oriented antiform art that appeared later in the decade, and Morris's landmark essay on "Anti Form," which marked a departure from art as object. In "The Arts of Existence," Morris invents three artists, who in their movement away from object-art and toward the extra-visual, reveal the limits and conditions of modern sculpture. Essays of the 1970s and 1980s reveal Morris's preoccupation with the broad conditions of memory and space, which were explored in his experiments with land reclamation and land art, with labyrinthine environments and carceral imagery. In the later essays, Morris looks at modern art's development in America, based on a framework of strategies produced by Duchamp, Pollock, and other key figures. In a refiguration of an interview with Roger Denson, Morris acts out a subtle mockery of himself and his art, collapsing the high seriousness of the intended format into a playful scheme.