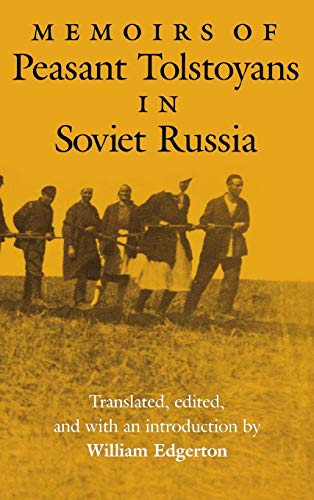 " ... an inspiring account of courage and tenacity."- Choice "The stories the men tell are fascinating in their details because each shows the history of the Russian peasantry as lived by individuals... This book ... deserves to be widely read by everyone interested in Russian culture." - The Russian Review " ... these reminiscences make a powerful impression and they reveal a fascinating, long-buried chapter in the history of the Russian peasantry ... " - Slavic Review " ... heartily recommended, not only as past history, but as dynamic inspiration of what our own mutual dedication could accomplish nowadays." - Communities

Following the 1917 revolution, thousands of Leo Tolstoy's Russian followers-intellectuals and peasants, workers and former soldiers-inspired by his ideas about the great moral significance of productive labor, joined together in agricultural communes, believing that they would implement the ideals proclaimed by the Russian revolution: the building of a humane, stateless society, free of violence and exploitation. The goals of the Tolstoyans soon came into conflict with the policies of the Soviet state. With the forced collectivization of agriculture in the late 1920s, most of the Tolstoyan cooperatives were closed down; however, one group, the Life and Labor Commune, was permitted to relocate to Siberia, where it became a haven for Tolstoy's peasant followers until it, too, was shut down on the eve of World War II. Persecuted by the authorities and frequently arrested and imprisoned during the 1930s, members of the Life and Labor Commune persisted in their pacifist beliefs, vegetarianism, and commitment to farming. The powerful and moving memoirs presented here throw light on a long-suppressed chapter in the hisory of Tolstoy's religious and social influence in the Soviet Union. They also document the history of the Russian peasantry from what appears to be a unique source-the peasants themselves.