Verwandte Artikel zu The Voice in the Drum: Music, Language, and Emotion...

Richard K. Wolf The Voice in the Drum: Music, Language, and Emotion in Islamicate South Asia

The Voice in the Drum: Music, Language, and Emotion in Islamicate South Asia 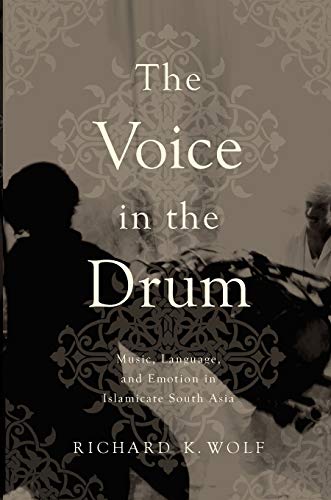 "No one else has conducted such multi-local research on traditions like this, and he has done a masterful job of relating these otherwise disparate traditions by highlighting their affinities, especially in terms of the ways in which their performers conceive of the drums as speaking in one manner or another. The result is a remarkable and unique scholarly opus."--Peter Manuel, author of East Indian Music in the West Indies: Tan-singing, Chutney, and the Making of Indo-Caribbean Culture "As can be expected from Richard K. Wolf, The Voice in the Drum is an erudite and masterful contribution to South Asian ethnomusicology. But it is more: a deep contribution to experimental writing, full of nuanced engagement with why the poetics and politics of representation is critical to contemporary music ethnography."--Steven Feld, Distinguished Professor of Anthropology and Music, University of New Mexico

Based on extensive research in India and Pakistan, this new study examines the ways drumming and voices interconnect over vast areas of South Asia and considers what it means for instruments to be voice-like and carry textual messages in particular contexts. Richard K. Wolf employs a hybrid, novelistic form of presentation in which the fictional protagonist Muharram Ali, a man obsessed with finding music he believes will dissolve religious and political barriers, interacts with Wolf's field consultants, to communicate ethnographic and historical realities that transcend the local details of any one person's life. The result is a daring narrative that follows Muharram Ali on a journey that explores how the themes of South Asian Muslims and their neighbors coming together, moving apart, and relating to God and spiritual intermediaries resonate across ritual and expressive forms such as drumming and dancing.