Anne Frank: Reflections on Her Life and Legacy

Anne Frank: Reflections on Her Life and Legacy 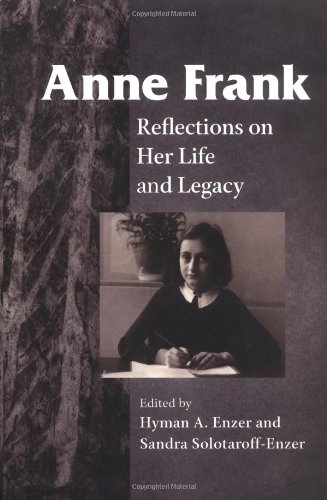 "An important publication and a must for every library." -- Choice "Belongs on your bedside table. We need to remember, we need to discuss, we need to forever keep sight of the tragic message that Anne's life and diary have engraved upon our hearts and minds." - April M. Leo, The Bloomsbury Review "The first section includes incredibly moving, but relatively straightforward accounts of Anne Frank's life. The other three sections, though, address more complex questions - how to interpret Anne Frank as a writer, as a character in theater and film depictions, and as a symbol of the Holocaust itself. Strong consensus exists on the power of the diary, which is described by various authors as the source of truths about humanity, as 'an intimate account of adolescence,' and as a window into the soul of a 'young, eager, difficult, lovable self' whose diary tells the story of 'her growth as an artist." - H-Women, H-Net Reviews "A superb collection of essays, reviews, and considerations of the legacy of an amazing young woman and her powerful diary... A wonderful resource... Highly recommended for anyone who teaches the Holocaust." -- Rabbi Deborah Zecher, Multicultural Review ADVANCE PRAISE: "I gladly endorse Anne Frank: Reflections on Her Life and Legacy. [The authors] have composed a book showing the importance of Anne Frank's role in today's world by using an unusually wide range of documents, diaries, reviews, and presentations. This remarkable book should be widely read and used, especially wherever the Holocaust in general, and Anne Frank's story in particular, are taught." - Jack Polak, Dutch holocaust survivor (Bergen-Belsen) and Chairman- Emeritus, Anne Frank Center U.S.A. "An exceptionally valuable collection of documents and essays on Anne Frank's life, death, and legendary afterlife. It is the most comprehensive volume I know of about a subject of great importance and enduring interest." - Lawrence Graver, author of An Obsession with Anne Frank: Meyer Levin and the Diary "This useful and varied collection conveniently assembles all the materials pertinent to Anne Frank's emergence as a cultural icon. Readers familiar with the diary will welcome the historical documentation of her life before and after the events she recorded." - Michael Shapiro, director of the Drobny Program in Jewish Culture and Society at the University of Illinois at Urbana-Champaign

Of all the memoirs that convey the human devastation of Hitler's Final Solution, Anne Frank's "The Diary of a Young Girl" is by far the most popular and influential. Since its publication in Holland in 1947, the diary has been translated into more than fifty languages, reprinted in millions of copies, and transformed into plays, films, teaching guides, and political tracts. These contending interpretations all serve to illuminate as well as obscure the 'real' Anne Frank.This book is the most complete anthology of the disparate facts and interpretations of Anne Frank. Here in a concise, readable volume are two dozen articles and memoirs most relevant for understanding her life, death, and legacy. They assess Anne Frank's qualities as a writer and scrutinize the proliferating controversies about her reputation, especially the way the stage and film versions have altered perceptions of her life and her diary. They also consider how interpreters of Jewish experience in World War II have defined Anne Frank's significance for memorializing the Holocaust.Anne Frank's memoir of eight Jews hiding in an attic for two years continues to resonate as a haunting reminder of the promise of a generation that was almost completely snuffed out. Thrown into relief by the horrors she constantly feared and eventually suffered, the young girl's uninhibited observations and self-analysis retain their poignancy and power. Supplemented by a complete record of the diary's publishing history and an extensive bibliography and index, this book provides an intriguing glimpse at how fact, fiction, history, and legend are intertwined.