Dombrowski, Daniel A. Babies and Beasts: The Argument from Marginal Cases

Babies and Beasts: The Argument from Marginal Cases 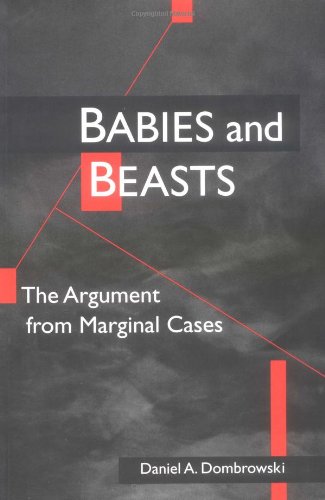 Book by Dombrowski Daniel A

"Excellent ... a clear, readable account of the debate that touches all the bases." -- James Rachels, author of Created from Animals: The Moral Implication of Darwinism

Both its defenders and detractors have described the argument from marginal cases as the most important to date in defense of animal rights. Hotly debated among philosophers for some twenty years, the argument concludes that no morally relevant characteristic distinguishes human beings including infants, the severely retarded, the comatose, and other "marginal cases"--from any other animals. Babies and Beasts presents the first book-length exploration of the broad range of views relating to the argument from marginal cases and sorts out and evaluates its various uses and abuses. Daniel Dombrowski analyzes the views of many who are prominent in the debate-- Peter Singer, Thomas Regan, H. J. McCloskey, Jan Narveson, John Rawls, R. G. Frey, Peter Carruthers, Michael Leahy, Robert Nozick, and James Rachels are included--in a volume that will be essential to philosophers, animal rights activists, those who work in clinical settings, and others who must sometimes deal with "marginal cases."