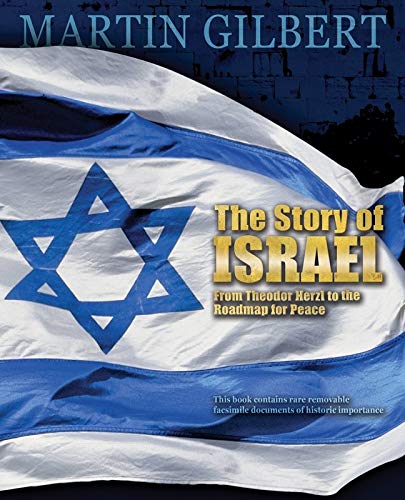 Just over 100 years ago, Theodor Herzl launched the Zionist Movement. They called for a Jewish State in their ancestral land, Palestine. Fifty years later, the State of Israel came into being. Israel was established so that Jews anywhere in the world could have a homeland of their own. After independence, that process began with the ingathering of three quarters of a million Jews from Arab lands. As Communism disintegrated, more than a million Jews emigrated from the Soviet Union. Despite war and terror, Israel has sought peace through both secret and public negotiations. These efforts continue to this day, despite two major Palestinian uprisings.

Martin Gilbert was educated at Highgate School and Magdalen College, Oxford. In 1962, he was appointed a Fellow of Merton College, Oxford, and in 1968 he became Winston Churchill's official biographer. He was in Israel during the October War of 1973 and came under Syrian shellfire on the Golan Heights. His Jewish History Atlas is a classic work of reference. He has been a visiting professor at both Tel Aviv and the Hebrew University, and spends part of every year in Israel. He has also written histories of the First and Second World Wars, of D-Day, of the Day the War Ended (in 1945) and of the Holocaust.