Tippecanoe and Tyler Too: Famous Slogans and Catchphrases in American History 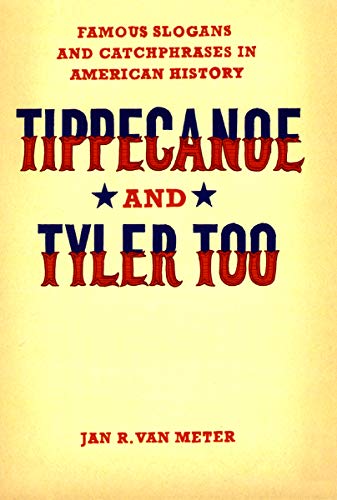 "As Van Meter argues, these are important 'memory devices for a larger story.'... The author has thoroughly researched all the catchphrases.... This book would make delightful in-flight reading or a nice gift for a trivia buff. Recommended." - Choice "As the great philosopher George Santayana would have said, 'those who cannot remember the past... should simply read Jan Van Meter's Tippecanoe and Tyler Too.' Van Meter's greatest hits collection of slogans is the catchiest ever retelling of American history. It's like the greatest minds of Madison Avenue sat down to write a history book. They don't make sound bites like they used to!" - Mo Rocca, author of All the Presidents' Pets"

By necessity, by proclivity, by delight, Ralph Waldo Emerson said in 1876, 'we all quote'. But often the phrases that fall most readily from our collective lips - like 'fire when ready', 'speak softly and carry a big stick', or 'nice guys finish last' - are those whose origins and true meanings we have ceased to consider. Restoring three-dimensionality to more than fifty of these American sayings, "Tippecanoe and Tyler Too" turns cliches back into history by telling the life stories of the words that have served as our most powerful battle cries, rallying points, laments, and inspirations. In individual entries on slogans and catchphrases from the early seventeenth to the late twentieth century, Jan R. Van Meter reveals that each one is a living, malleable entity that has profoundly shaped and continues to influence our public culture. From John Winthrop's 'We shall be as a city upon a hill' and the 1840 Log Cabin Campaign's "Tippecanoe and Tyler Too" to Martin Luther King Jr.'s 'I have a dream' and Ronald Reagan's 'Mr. Gorbachev, tear down this wall', each of Van Meter's selections emerges as a memory device for a larger political or cultural story. Taken together in Van Meter's able hands, these famous slogans and catchphrases give voice to our common history even as we argue about where it should lead us.