The Science of Describing: Natural History in Renaissance Europe 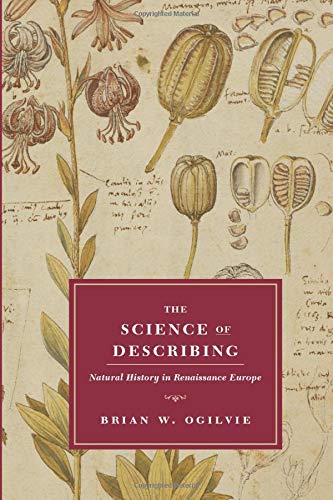 "In this beautifully illustrated, fascinating book, Brian Ogilvie shows how the natural sciences developed in a vigorous and quite different way to the experimentalism of the 'hard' sciences." - Adrian Barnett, New Scientist "Ogilvie shows that history has much to teach us.... [He] has done more than just write about the Renaissance science of describing; he has written the story of how science constantly reinvents itself, seen through the lens of the pre-Linnaeans." - Sandra Knapp, Nature "A book that... breaks with tradition even as it builds on it. Brian Ogilvie argues convincingly that we need to discard, once and for all, the idea that natural history remained largely static from the era of Aristotle until the birth of the modern world." - Jim Endersby, Times Literary Supplement"

Out of the diverse traditions of medical humanism, classical philology, and natural philosophy, Renaissance naturalists created a new science devoted to discovering and describing plants and animals. Drawing on published natural histories, manuscript correspondence, garden plans, travelogues, watercolors, and drawings, The Science of Describing reconstructs the evolution of this discipline of description through four generations of naturalists.

In the late fifteenth and early sixteenth centuries, naturalists focused on understanding ancient and medieval descriptions of the natural world, but by the mid-sixteenth century naturalists turned toward distinguishing and cataloguing new plant and animal species. To do so, they developed new techniques of observing and recording, created botanical gardens and herbaria, and exchanged correspondence and specimens within an international community. By the early seventeenth century, naturalists began the daunting task of sorting through the wealth of information they had accumulated, putting a new emphasis on taxonomy and classification.

Illustrated with woodcuts, engravings, and photographs, The Science of Describing is the first broad interpretation of Renaissance natural history in more than a generation and will appeal widely to an interdisciplinary audience.

1. The Science of Describing : Natural History in Renaissance Europe