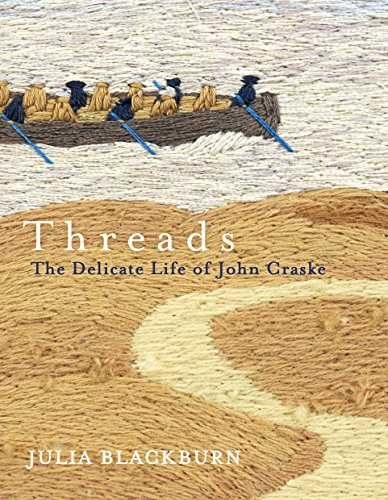 "Oh, what a miraculous book this is: parochial, weird and inconclusive in a way that few books dare to be these days, and illustrated so generously, with something beautiful or interesting on every other page. Buy it, and let it take you out to sea, no sou’wester required." (Rachel Cooke Observer)

"Wonderful... I lay down her book without knowing the cause of the “mental stupors” that defined Craske’s life, or understanding his relationship to his complicated family, but feeling I had inhaled the cold salt of the East Anglian coastline from which he sailed when he was well, and run my fingers across the bright wool of the embroideries he made when he was not." (Helen Brown, 5 stars Daily Telegraph)

"I believe I have already found my book of the year. Blackburn’s “biography”... almost defies the category... But it is so beautifully and hypnotically done that each page leaves you spellbound. Rarely can such an unusual telling so thoroughly, and so movingly, reflect the nature of the life being told." (Lesley McDowell Herald)

"I wish I could quote something from every page as that would convince you to read this book... This is a book to remind you that wonders lie scattered like jewels in the most ordinary places." (Rachel Campbell-Johnston The Times)

"It is hard to pin down what it is that makes Threads such a warmly attractive book... Julia Blackburn is an odd, sometimes even disconcerting writer, but she is an amazingly good one, too. The words she puts on paper do what written words should do: they make things real... She leaves her reader feeling grateful and happy." (Literary Review)

Winner of the East Anglian Book of the Year 2015

John Craske, a Norfok fisherman, was born in 1881 and in 1917, when he had just turned thirty-six, he fell seriously ill. For the rest of his life he kept moving in and out of what was described as ‘a stuporous state’. In 1923 he started making paintings of the sea and boats and the coastline seen from the sea, and later, when he was too ill to stand and paint, he turned to embroidery, which he could do lying in bed. His embroideries were also the sea, including his masterpiece, a huge embroidery of The Evacuation of Dunkirk.

Very few facts about Craske are known, and only a few scattered photographs have survived, together with accounts by the writer Sylvia Townsend Warner and her lover Valentine Ackland, who discovered Craske in 1937. So - as with all her books - Julia Blackburn’s account of his life is far from a conventional biography. Instead it is a quest which takes her in many strange directions - to fishermen’s cottages in Sheringham, a grand hotel fallen on hard times in Great Yarmouth and to the isolated Watch House far out in the Blakeney estuary; to Cromer and the bizarre story of Einstein’s stay there, guarded by dashing young women in jodhpurs with shotguns.

Threads is a book about life and death and the strange country between the two where John Craske seemed to live. It is also about life after death, as Julia’s beloved husband Herman, a vivid presence in the early pages of the book, dies before it is finished.

In a gentle meditation on art and fame; on the nature of time and the fact of mortality; and illustrated with Craske’s paintings and embroideries, Threads shows, yet again, that Julia Blackburn can conjure a magic that is spellbinding and utterly her own.