Richard Brown Synoptical Sketch of the Illustrious & Sovereign Order of Knights of Hospitallers of St. John of Jerusalem; And of the Venerable Langue of England

Synoptical Sketch of the Illustrious & Sovereign Order of Knights of Hospitallers of St. John of Jerusalem; And of the Venerable Langue of England 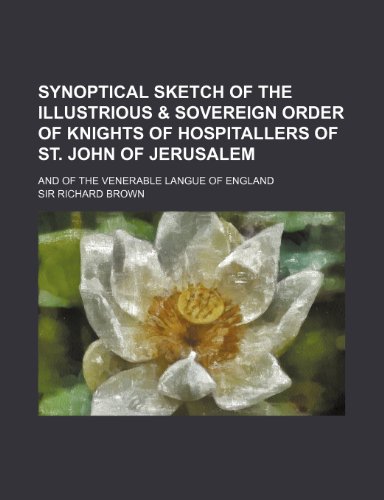 This historic book may have numerous typos and missing text. Purchasers can download a free scanned copy of the original book (without typos) from the publisher. Not indexed. Not illustrated. 1857. Excerpt: ... "combat everything prejudicial to its well-being; never to act con"trary to its dignity, but to conduct myself always as a true knight, ". that is to say, as a good Christian, and a man of honor." In conclusion, then, let it suffice to say that the Knights of the Langue of England--not content that there is no crowned personage in Europe on. whose breast the star of the Order of St. John has not a prominent place, no royal blood which does not covet its honors and distinctions, no knight of whatever royal degree who does not esteem the White Cross in chief the proudest emblem of knightly rank on his ancestral escutcheon--only "bide their time " to prove by acts and deeds of a meritorious description, that they do not again assert their place and rank amongst the Eight-branched chivalry of the Baptist, without asjpiring to re-occupy their ancient illustrious status in such a manner as shall progressively make their Langue worthy of their great ancestral fame, their proud historical reminiscences, and their known chivalrous predilections. To repair at home the dilapidations which a neglect of centuries has made within the Grand Priories of the British Isles; to re-animate abroad the ranks of the Chivalry in every nook and corner of Christendom; to stir up in all lands, nations, and tongues, a revival of Hospitallery feeling and Hospitallery actions, are objects before which that ambition which is of the meaner sort, pales its evanescent and ineffectual fire. Believing that for the attainment of such high and praiseworthy ends, no more auspicious era than this will ever present itself, the Executive Council of the Venerable Sixth Langue now invites the zealous co-operation, not only of the knightly confreres of the Sovereign Order wheresoever located, but al...