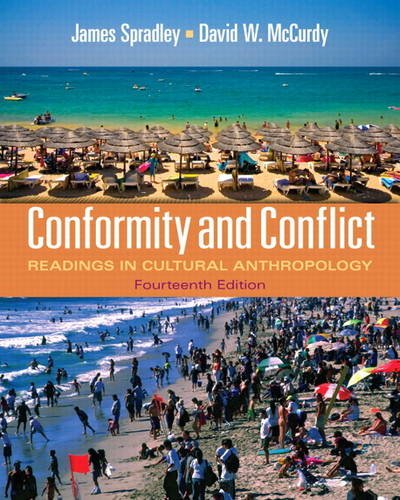 Demonstrate the nature of culture and its influence on people's lives. For over 40 years, the best-selling Conformity and Conflict has brought together original readings and cutting edge research alongside classic works as a powerful way to study human behavior and events. Its readings cover a broad range of theoretical perspectives and demonstrate basic anthropological concepts. The Fourteenth Edition incorporates successful articles from past editions and fresh ideas from the field to show fascinating perspectives on the human experience. Teaching and Learning Experience Personalize Learning - MyAnthroLab delivers proven results in helping students succeed, provides engaging experiences that personalize learning, and comes from a trusted partner with educational expertise and a deep commitment to helping students and instructors achieve their goals. Improve Critical Thinking - Articles, article introductions and review questions encourage students to examine their assumptions, discern hidden values, evaluate evidence, assess their conclusions, and more! Engage Students - Section parts, key terms, maps, a glossary and subject index all spark student interest and illustrate the reader's main points with examples and visuals from daily life. Support Instructors - Teaching your course just got easier! You can create a Customized Text or use our Instructor's Manual, Electronic "MyTest" Test Bank or PowerPoint Presentation Slides. Additionally, Conformity and Conflict's part introductions parallel the basic concepts taught in introductory courses - which allow the book to be used alone as a reader or in conjunction with a main text. Note: MyAnthroLab does not come automatically packaged with this text. To purchase MyAnthroLab, please visit www.MyAnthroLab.com or you can purchase a valuepack of the text + MyAnthroLab (at no additional cost): VP ISBN-10: 0205176011/ISBN-13: 9780205176014

In This Section: I. Author Bios II. Author Letter I. Author Bio James P. Spradley was a professor of Anthropology at Macalester College from 1962 until his passing in 1982. He was a prolific author who wrote or edited 20 books in 12 years. He made especially notable contributions to the literature on ethnography and qualitative research. David McCurdy has been a professor of Anthropology at Macalester since 1966, acting as chair of the department for extended periods since 1969. He was the first recipient of the American Anthropological Association/ Mayfield Award for Undergraduate Teaching (1997), and he was the subject of an article in 1977 by Change Magazine for innovative teaching in anthropology. Professor McCurdy received a B.A. from Cornell University in 1957, a Masters in Anthropology from Stanford University in 1959, and a Ph.D. in Anthropology from Cornell Univeristy in 1964. He completed a major ethnography (1961-1963), then restudy (1985, 1991, 1994) of a Bhil tribal community in Rajasthan, India. He has also conducted a cross-cultural study of spirit possession (1966-1967). His ethnographic studies have examined corporate managers (1983), stockbrokers (1980), Jehovah witnesses (1973), as well as members of an environment movement (1968-1969). He has also performed continued ethnography (1988-1999) on a national motocycle association. II. Author Letter Dear Colleague, Forty-one years ago, James Spradley and I prepared the first edition of an introductory anthology, CONFORMITY AND CONFLICT: Readings in Cultural Anthropology. Regularly revised since then, CONFORMITY ... will appear in its fourteenth edition this coming summer. I write to share with you some of its enduring features and report on what is new for the coming version. From the beginning, Jim and I sought to design a reader that was accessible to students and useful to anthropology instructors. We searched for articles written by anthropologists for the public since, like the public, students rarely had previous experience with our discipline. Where suitable articles were unavailable, we asked anthropologists to write selections especially designed for CONFORMITY ... using a narrative style. To enhance interest, we also chose material that dealt with current topics and American life so students could see how anthropology might reveal aspects of their own lives and social settings. For instructors, we organized the book around typical cultural anthropology texts. And, we sought out articles that stressed the importance of culture, cross-cultural misunderstanding, social structure, basic approaches to explanation, and social justice. As time went on, I added part introductions that discussed and defined basic anthropological terms and approaches for use by instructors who chose not to assign regular textbooks. More recently, I added additional selections on globalization, medical anthropology, and applied anthropology since these topics have become more important to anthropologists and students. The fourteenth edition mirrors this general plan and contains fresh material to enhance student interest and understanding. Additions include: * Eight new articles, four of them written especially for this edition. * Updates and revisions of five articles found in the thirteenth edition. * Two articles brought back from previous editions. * Discussion of two new concepts, metaphor and linguistic framing, for Part 2 (Language and Communication), as well as an exciting new article on current research related to the Sapir-Whorf hypothesis. * Addition to Part 3 (Subsistence and Ecology) of a new article on Eskimo "science" and a second selection brought back from a previous edition detailing the relation between animal domestication and the development and spread of pandemic diseases. * Two new articles in Part 6 (Identity, Roles, and Groups) including one original to this edition on the how the Internet shapes one's work identity in America, and a second on Western women's reactions to Muslim women's dress. * A new original article on tourism and a second brought back about globalization added to Part 9 (Globalization.) * Three new articles, two of them original, included in Part 10 (Culture Change and Applied Anthropology). In closing, I hope you will take a look at the fourteenth edition and find that it meets your instructional needs and those of your students. And as always, I encourage you to send me your comments, suggestions, and ideas for future articles, as well as your own original submissions. All the best, David W. McCurdy Macalester College dcmccurdy@comcast.net