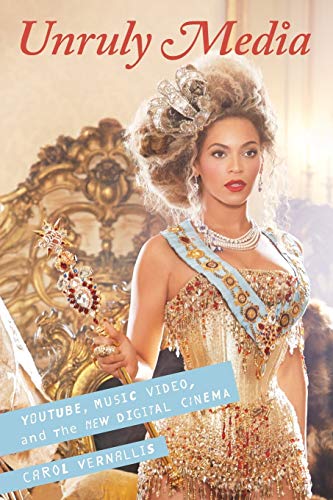 Unruly Media is ambitious in scope yet is written with a lightness of touch. Vernallis guides us through music video, YouTube, and digital cinema, tackling the rewards and challenges of their mutually-influencing 'accelerated aesthetic'. An insightful and original study. (Caryl Flinn, Professor of Screen Arts and Cultures, University of Michigan)

Carol Vernallis was already the best scholar of music video, and I've waited eagerly for this new book. In Unruly Media she offers a sharp, ground-breaking account of what happens when the boundaries between film, video and digital media are criss-crossed in a myriad of interesting ways. (Will Straw, Professor of Art History and Communication Studies, McGill University)

Carol Vernallis's work on soundtracks in digital media seems to me the most exciting commentary on sound/image relationship since Michel Chion's Voice in Cinema. When I read one of Carol's virtuoso treatments of moment-to-moment musical shaping of image reception, I often feel that I have barely attended to sound components at all. Her jazzy prose has an exultant, frequently hallucinatory vividness that takes you all the way in to whatever experience she's describing. It is rare to find film (much less music video) criticism that delights and instructs, as Carol's does, in equal measure. (George Toles, University of Manitoba)

Full of flair, unexpected twists and non-linear asides, Unruly Media resembles the unique flow of new audiovisual media, inviting the reader to assemble the parts herself and become part of this post-classical scholarship. (Twentieth Century Music)

Carol's in-depth analysis of music-video culture and its fate is an eye-opening look into pop culture. It is an engrossing and thought-provoking read―worth checking out. (Jonas Akerlund, director of Spun, Small Apartments, Beyonce's "Haunted" and "Superpower," and Lady Gaga's "Paparazzi" and "Telephone".)

Unruly Media argues that we're on the crest of a new international, intermedial style in which sonic and visual parameters become heightened and accelerated. This audiovisual turn, driven by digital technologies and socioeconomic changes, calls for new forms of attention. Post-classical cinema, with its multi-plot narratives and flashy style, fragments under the influence of audiovisual numbers and music-video-like sync. Music video, after migrating to the web, becomes more than a way of selling songs. YouTube's brief and low-res clips encompass many forms, and foreground reiteration, graphic values and affective intensity. All three of these media are riven by one another: a trajectory from YouTube through music video to the new digital cinema reveals structural commonalities, especially in the realms of rhythm, texture and form.

Music video, YouTube, and postclassical cinema remain undertheorized. This is the first book to account for the current audiovisual landscape across medium and platform-to try to characterize the audiovisual swirl. Unruly Media includes both new theoretical models and readings of numerous current multimedia works. It also includes several chapters devoted to the oeuvre of highly popular directors, their films, commercials and music videos. Unruly Media argues that attending equally to soundtrack and image can show how these media work, and the ways they both mirror and shape our modern experience.