Verwandte Artikel zu The Cold War: A History in Documents (Pages from History)

Winkler, Allan M. The Cold War: A History in Documents (Pages from History)

The Cold War: A History in Documents (Pages from History) 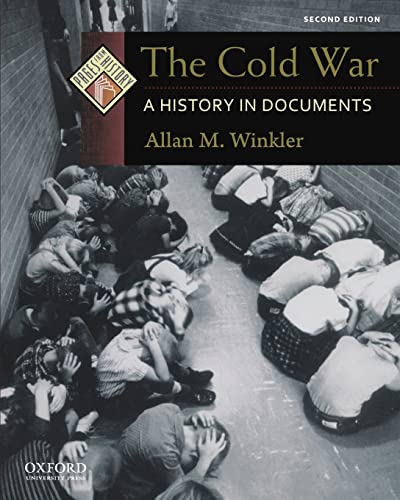 The cold war lasted for more than fifty years and polarized the world. Rooted in political and ideological disagreements dating back to the Russian Revolution of 1917, the war emerged from disputes that intensified in the wake of World War II. In The Cold War: A History in Documents, Second Edition, Allan M. Winkler excerpts speeches by Soviet premier Joseph Stalin and British prime minister Winston Churchill in order to demonstrate the growing abyss between the two political systems. President Harry S. Truman's announcement of the existence of a Soviet atomic bomb and his speech to Congress launching the Truman Doctrine testify to the gravity of the situation. The complex politics of the Vietnam War appear in voices of those as divergent as Vietnamese nationalist Ho Chi Minh, President Lyndon B. Johnson, antiwar protestors, and a participant in the My Lai massacre. A picture essay, "The Atom Unleashed," provides a collection of photographs and cartoons tracing one of the most controversial discoveries of the twentieth century. And a final chapter chronicles in detail the end of the cold war.

The second edition of The Cold War: A History in Documents offers more thorough coverage of the 1970s through the1990s. The book features additional material on China and Africa, and several new images, including a Herblock editorial cartoon about the Marshall Plan and a French Communist Party poster for peace in Vietnam. There is also a revised note on sources and interpretation and updates to the lists of further reading and websites.

Allan M. Winkler is Distinguished Professor of History at Miami University in Ohio. A prize-winning teacher, he is author of ten books of his own, including "To Everything There Is a Season": Pete Seeger and the Power of Song (OUP, 2010), Franklin D. Roosevelt and the Making of Modern America (2005), and Life Under a Cloud: American Anxiety about the Atom (1993), and coauthor of the college textbook The American People: Creating a Nation and a Society (2011) and the high school textbook America: Pathways to the Present (2002).