Verwandte Artikel zu Tom Bingham and the Transformation of the Law: A Liber... 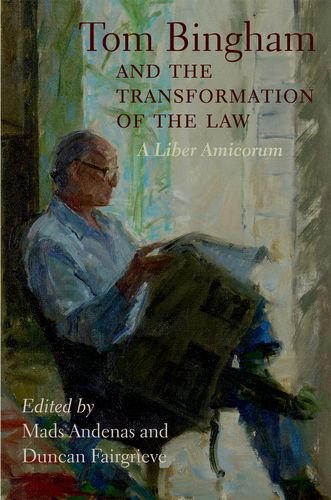 The book is immensely rich. Anyone reading it from cover to cover will be well informed on all the great issues of the day. (Joshua Rozenberg, Gazette, July 2009)

Full of treasures of information and insight―this book tells in 900 pages, from a number of detailed viewpoints, the story of a life richly lived, whose judicial and academic influence has enriched the life of nations worldwide. (Phillip Taylor MBE and Elizabeth Taylor, Richmond Green Chambers, London)

It is a book which must have given huge pleasure to its dedicatee and will also be much enjoyed by a wider readership...It draws together an array of judicial, academic and practising great and good (from the United Kingdom, Europe, the Commonwealth and the United States) to provide an impressive range of writing on matters of contemporary legal concern. (Chris Himsworth, University Of Edinburgh, Edinburgh Law Review vol 14)

No lawyer sensible and curious enough to purchase the book will go away intellectually empty-handed. (C.J.S. Knight, Law Quarterly Review)

The arc of the book is ambitious...it represents an impressive achievement...The essays in this book are there to be dipped into and enjoyed for their own sake as much as that of the collection as a whole...A number of essays stand out in particular as worth seeking out first...aims to make a different contribution to legal scholarship...It reflects a judicial career which was characterised in great measure by a government which initially promoted human rights, then sought to reside as far as possible from them in the name of fighting terrorism (Thom Dyke, Public Law)

The essays are grouped under five broad heads: the rule of law and the role of law; the independence and organisation of the courts; European and international law in national courts; commercial law and globalisation; and comparative law in the courts. Most of the contributions have a personal touch which makes for very interesting reading (and sets the book apart from a number of other festschriften). An excellent biographical sketch, by Ross Cranston, reminds readers of Bingham's rich and busy life and career and his numerous achievements. Lord Phillips of Matravers writes movingly about Bingham's courtesy and compares him with that other giant of the modern legal scene, Lord Denning...this volume is guaranteed a wide audience, spanning the length and breadth of the Commonwealth. (Journal of the Commonwealth Lawyers' Association)

Tom Bingham was among the most influential judges of the twentieth century, having occupied in succession the most senior judicial offices, Master of the Rolls, Lord Chief Justice and Senior Law Lord, before retiring in 2008, at which point he devoted himself to the teaching of Human Rights Law, until his death in September 2010. His judicial and academic work has deeply influenced the development of the law in a period of substantial legal change. In particular his role in establishing the new UK Supreme Court, and his views on the rule of law and judicial independence left a profound mark on UK constitutional law. He was also instrumental in championing the academic and judicial use of comparative law, through his judicial work and involvement with the British Institute of International and Comparative Law.

This volume collects around fifty essays from colleagues and those influenced by Lord Bingham, from across academia and legal practice. The essays survey Lord Bingham's pivotal role in the transformations that took place in the legal system during his career.