Verwandte Artikel zu Dachau and the SS: A Schooling in Violence

Dillon, Christopher Dachau and the SS: A Schooling in Violence

Dachau and the SS: A Schooling in Violence 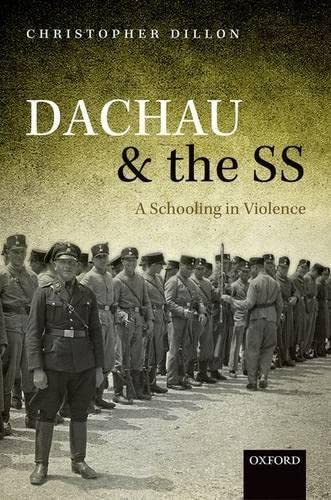 provides revealing insights not only into the camp's personnel, but also into the dynamic nature of Nazi violence more generally (David Motadel, The Times Literary Supplement)

An assiduously researched and intelligently argued book that takes our understanding of the camp personnel to a different level. Even in a crowded field such as this, it genuinely stands out ― above all, perhaps, in its account of the dynamics of masculine identity creation and performance in Dachau, opening up new terrain on gender and murder in this context. (Neil Gregor, Times Higher Education)

Dillon has produced a highly readable history of the Dachau SS units during the prewar years that offers a great deal of new information and is recommended reading for everyone who is interested in the connection between violence and masculinity under National Socialism. (Marc Buggeln, American Historical Review)

Dillon's monograph is a thoughtful addition to the scholarly literature on the concentration camp system and perpetrator motivations. (Edward B. Westermann, Holocaust and Genocide Studies)

In a penetrating analysis, he shows that their violence was not only the result of broader Nazi ideology but emerged also from a localized Bavarian context of racism and vendetta, deeply influenced by the memory of civil war and revolutionary violence dating back to 1919 ... Dillon adds detail to the story of the harsh, sometimes humiliating, training of SS recruits, the meaning of their pseudo-military deportment, and the generational dimension. (Alan Kramer, Journal of Modern History)

Combining extensive new research into the pre-war history of Dachau with theoretical insights from studies of perpetrator violence, this book offers the first systematic study of the 'Dachau School'. It explores the backgrounds and socialization of thousands of often very young SS men in the camp and critiques the assumption that violence was an outcome of personal or ideological pathologies. Christopher Dillon analyses recruitment to the Dachau SS and evaluates the contribution of ideology, training, social psychology and masculine ideals to the conduct and subsequent careers of concentration camp guards. Graduates of the Dachau School would go on to play a central role in the wartime criminality of the Third Reich, particularly at Auschwitz. Dachau and the SS makes an original contribution to scholarship on the pre-history of the Holocaust and the institutional organisation of violence.

1. Dachau and the SS: A Schooling in Violence