Bush, Stephen S. Visions of Religion: Experience, Meaning, and Power (AAR Reflection and Theory in the Study of Religion)

Visions of Religion: Experience, Meaning, and Power (AAR Reflection and Theory in the Study of Religion) 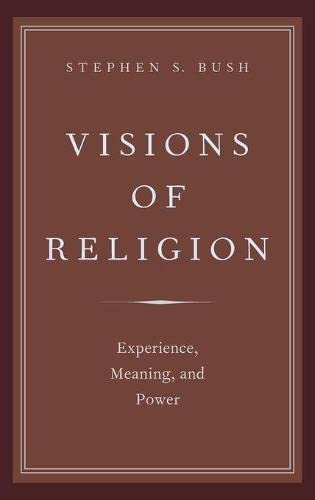 Visions of Religion offers a long-overdue call for the integration of approaches to the study of religion that prioritize experience, meaning, or power to make the case that all three are important aspects of religion as social practice. (Ann Taves and Nathan Fredrickson, Religion)

Three understandings of the nature of religion―religion as experience, symbolic meaning, and power―have dominated scholarly discussions, in succession, for the past hundred years. Proponents of each of these three approaches have tended to downplay, ignore, or actively criticize the others.

But why should the three approaches be at odds? Religion as it is practiced involves experiences, meanings, and power, so students of religion should attend to all three. Furthermore, theorists of religion should have an account that carefully conceptualizes all three aspects, without regarding any of them as more basic than the others.

Visions of Religion provides just such an account. Stephen S. Bush examines influential proponents of the three visions, arguing that each approach offers substantial and lasting contributions to the study of religion, although each requires revision.

Bush rehabilitates the concepts of experience and meaning, two categories that are much maligned these days. In doing so, he shows the extent to which these categories are implicated in matters of social power. As for power, the book argues that the analysis of power requires attention to meaning and experience.

Visions of Religion accomplishes all this by articulating a social practical theory of religion that can account for all three aspects, even as it incorporates them into a single theoretical framework.