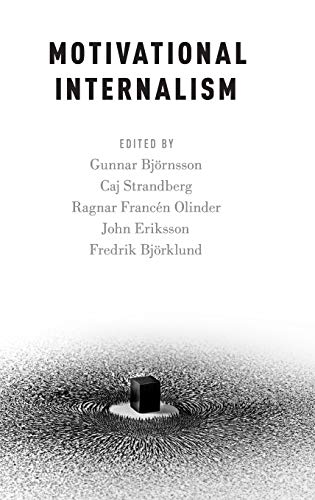 The editors of this collection have brought together an excellent set of philosophers to address the previous question. Roughly one half of the contributors are leading senior metaethicists who have already made important contributions to this debate, whereas the rest are younger scholars who were selected through an open call for abstracts. The editors have also provided a helpful overview article and arranged the articles of the volume clearly under three distinct headings ... I can recommend this collection wholeheartedly to everyone who is interested in the judgement internalism debate. I can also recommend many individual articles to those metaethicists who are working on other important questions in metaethics and moral psychology.

... it will be interesting to those already engaged in, or making plans to wade into, that debate. The volume would also be suitable as a text for a graduate seminar focused on motivational internalism. The editors' lengthy introductory chapter and shorter introductions to the three sections do an admirable job of introducing less well-traveled readers to unfamiliar terrain. (Gunnar Björnsson, Notre Dame Philosophical Reviews Online)

I know of no better way of summarizing how good this collection is than to say that the essays within manage to say new and interesting things about motivational internalism. (Derek Baker, Australasian Journal of Philosophy.)

Motivational internalism-the idea that there is an intrinsic or necessary connection between moral judgment and moral motivation-is a central thesis in a number of metaethical debates. In conjunction with a Humean picture of motivation, it provides a challenge for cognitivist theories that take moral judgments to concern objective aspects of reality. Versions of internalism have potential implications for moral absolutism, realism, non-naturalism, and rationalism. Being a constraint on more detailed conceptions of moral motivation and moral judgment, it is also directly relevant to wider issues in moral psychology. But internalism is a controversial thesis, and the apparent possibility of amoralists and the rejection of strong forms of internalism have also been seen as problems for non-cognitivists.

This volume's thirteen new essays and introduction are meant to help readers appreciate state-of-the-art of research on internalism, to identify connections between various aspects of the debate, and to deepen discussion of a number of central aspects of metaethics. The introductory chapter provides a structured overview of the debate with a focus on the last two decades, while the book's three main sections focus on what evidence there is for or against various versions of internalism, the relevance of versions of internalism for wider metaethical issues, and different ways of accommodating both internalist and externalist aspects of moral practice, respectively.