The ITC International Handbook of Testing and Assessment

The ITC International Handbook of Testing and Assessment 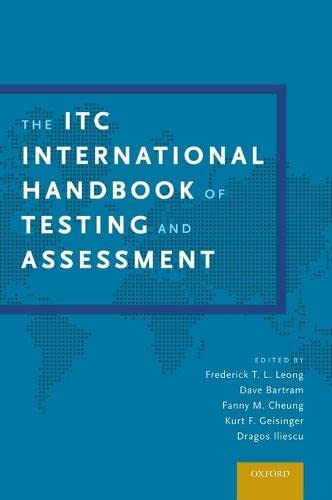 During the last several years social scientists have increasingly recognized the impact of globalization on research and practice. It is imperative that psychology as a field be cognizant of this ongoing shift and that psychologists begin to integrate their various models, theories, and perspectives into a global curriculum.

Sponsored by the International Testing Commission, The ITC Handbook of International Testing and Assessment is dedicated to the advancement of theory, research, and practice in the area of international testing and assessment in psychology, education, counseling, organizational behavior, human resource management, and related disciplines. Bringing together international contributors from a range of disciplines, each chapter provides a review of testing and assessment research and practices around the world as well as a discussion of conceptual and methodological challenges to help advance the field. As The ITC Handbook, it also provides a historical perspective of international testing, the development of the ITC, and its guidelines. Recognizing that cultural and international contexts are essential to a true and accurate psychology, the authors describe how cultural, economic, political, and social factors in different countries frame the science and practice of testing and assessment. The ITC Handbook is a must-have resource for testing professionals and graduate students from psychology and related disciplines.