Verwandte Artikel zu Lying, Misleading, and What is Said: An Exploration...

Saul, Jennifer Mather Lying, Misleading, and What is Said: An Exploration in Philosophy of Language and in Ethics

Lying, Misleading, and What is Said: An Exploration in Philosophy of Language and in Ethics 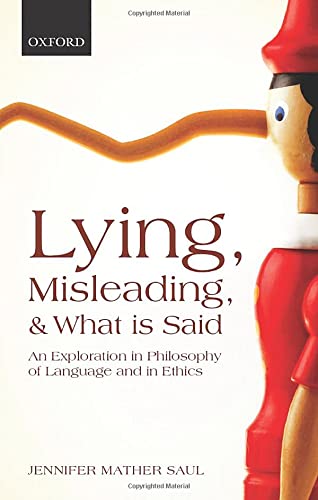 Saul has done philosophy a great service by bringing into conversation two subfields that have long remained isolated from one another, namely, philosophy of language and moral philosophy. (Kevin M. Graham, Newsletter on Feminism and Philosophy)

In this excellent and enjoyable book, Jennifer Saul explores issues at the convergence of the philosophy of language and ethics. Her book is an excellent addition to a growing literature of what might be considered applied philosophy of language. . . . a rewarding read that is sure to provoke interesting dialogue about how to define lying, our notions of what is said, and the moral difference between lying and misleading. (Luvell Anderson, Notre Dame Philosophical Reviews)

Analytic philosophy of language is rightly admired for its clarity, logical acumen and attention to subtle linguistic detail. Too few of us, however, pursue the connections between philosophy of language on the one hand, and issues in value theory on the other. Fewer still attempt to shed light on problems in the philosophy of language by drawing on ethics. Jennifer Saul, a leading voice among traditionalists, attempts just this in her latest book. . . . In our view, Saul's experiment is a smashing success. It has been years since we read such a pioneering and stimulating book in our sub-field. (Melissa MacAulay and Robert J. Stainton, Philosophy in Review)

Saul's writing is clear and lively, presenting theoretical notions and debates in a manner that should be accessible to readers from a variety of backgrounds. . . . makes real progress on some important philosophical questions, and is an entertaining and rewarding [book] to boot. (Ishani Maitra, Times Higher Education)

Many people (both philosophers and not) find it very natural to think that deceiving someone in a way that avoids lying―by merely misleading―is morally preferable to simply lying. Others think that this preference is deeply misguided. But all sides agree that there is a distinction. In Lying, Misleading, and What is Said, Jennifer Saul undertakes a close examination of the lying/misleading distinction. Saul begins by using this very intuitive distinction to shed new light on entrenched debates in philosophy of language over notions like what is said. Next, she tackles the puzzling but widespread moral preference for misleading over lying, and arrives at a new view regarding the moral significance of the distinction. Finally, Saul draws her conclusions together to examine a range of historically important and interesting cases, from a consideration of modern politicians to the early Jesuits.

1. Lying, Misleading, and What is Said: An Exploration in Philosophy of Language and in Ethics