Haacker, Markus The Economics of the Global Response to HIV/AIDS

The Economics of the Global Response to HIV/AIDS 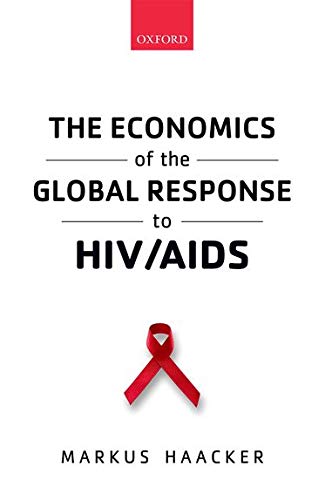 Haacker's contribution is the most thoughtful, forward-looking, and practically-oriented treatise on the economics of HIV/AIDS to appear in years. It offers an up-to-date economic review of alternative HIV/AIDS interventions and provides a valuable framework for designing context-specific prevention and control strategies. Haacker's book is must reading for anyone interested in the economics of HIV/AIDS, and global health more generally. (David Bloom, Professor of Economics and Demography, Harvard School of Public Health)

As the architecture of the global AIDS response changes, the economic perspectives have become very important. Markus Haacker provides a timely analysis of critical issues challenging countries in the most affected region of the world - effectiveness, efficiency, sustainability, and the future of the AIDS response . . . an essential read for all health professionals and policy makers. (Sheila Tlou, Director UNAIDS RST Eastern and Southern Africa, and former Minister of Health of Botswana)

This is a timely and well researched book on an issue that will remain of relevance to large populations, not least in Africa, for many decades. (Stefan Dercon, Professor of Economic Policy, University of Oxford, and Chief Economist, UK Department for International Development)

Markus Haacker provides a very thoughtful analysis of the global AIDS response, not only of the economics, but also of the complex politics. As the AIDS response is changing and at risk of complacency, it is essential that we learn lessons from the past. (Peter Piot, Director of the London School of Hygiene and Tropical Medicine, and former Executive Director of UNAIDS)

AIDS is the most studied epidemic in history. Since the virus was identified in 1983, there has been heated debate on the economic causes and consequences of the illness. In this masterly book Haacker assembles and interprets the latest data. It is a sobering must read for economists, public health professionals, and domestic and donor governments. (Alan Whiteside, Chair in Global Health Policy, Wilfrid Laurier University and Balsillie School of International Affairs, Canada)

Markus Haacker delivers a much-needed comprehensive economic and financial analysis of the HIV epidemic. It will join the must read list for anyone with serious interest in the economics of this unprecedented epidemic. Dr Haacker has traced the economic and fiscal impacts of the HIV epidemic since its outbreak. He uses cost-effectiveness analysis to provide a framework for decision-making, while cogently explaining the complexities of using such tools for a disease that is transmissible, life-long, and heterogeneously distributed among and between populations. (Stefano Bertozzi, Dean, Berkeley School of Public Health, former Director of HIV and Tuberculosis at Gates Foundation and Director of WHO Global Programme on AIDS)

The global response to HIV/AIDS has been a major aspect of global health and development policy over the last three decades. The book illustrates the devastating health impacts of the epidemic, with life expectancy in some countries falling to the lowest levels observed anywhere, and the remarkable success of the global HIV/AIDS response in reversing such extreme outcomes.

Concerns about the implications of HIV/AIDS for economic development have played a role in motivating the global HIV/AIDS response. However, evidence on the impacts of HIV/AIDS on economic growth or poverty is weak, and the magnitude and relevance of such economic effects appears trivial compared to the consequences for life and health.

Because of the success in extending access to treatment globally, HIV/AIDS has effectively transitioned into a chronic disease. This means that HIV/AIDS absorbs not only a substantial chunk of current global and national financial resources, but that these spending needs are projected to persist over decades. The costs of the HIV/AIDS response thus resemble a long-term financial liability, shaped by past and current policies.

Relatedly, the calculus of cost-effectiveness of HIV/AIDS interventions has changed. People who become infected with HIV can now expect to not die because of AIDS; at the same time, each HIV infection results in medical needs and expenditures extending over decades. The book presents a framework for integrating these financial consequences and the transmission dynamics of HIV in the analysis of cost-effectiveness of HIV/AIDS interventions and in the design of HIV/AIDS programs.