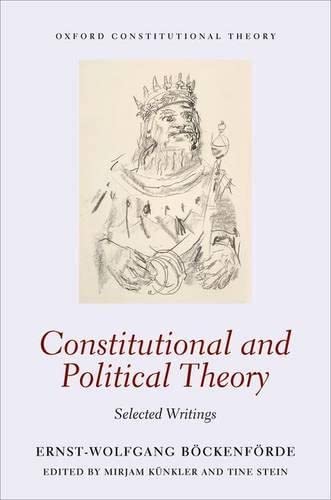 Both as a justice and thinker, Ernst-Wolfgang Böckenförde is a towering figure in German law and philosophy. It is past time for the English-speaking world to fully confront his remarkable contributions to modern constitutionalism. (Bruce Ackerman, Sterling Professor of Law and Political Science, Yale University)

Few scholars have been as decisive and important to German constitutional thinking as Ernst-Wolfgang Böckenförde. The translation into English of some of his major works will make a similar contribution to constitutional theorizing well beyond the German-speaking world. Böckenförde falls into the rare category of indispensable scholarship. (J. H. H. Weiler, Joseph Straus Professor of Law and European Union Jean Monnet Chair, New York University School of Law)

This is a major contribution to the debate and should be read by everyone with interests at the intersection of constitutional and political theory. (Kim Lane Scheppele, Laurance S. Rockefeller Professor of Sociology and International Affairs, the Woodrow Wilson School and the University Center for Human Values, Princeton University)

Ernst-Wolfgang Böckenförde (b. 1930) is one of Europe's foremost legal scholars and political thinkers. As a scholar of constitutional law and a judge on Germany's Federal Constitutional Court (December 1983 - May 1996), Böckenförde has been a major contributor to contemporary debates in legal and political theory, to the conceptual framework of the modern state and its presuppositions, and to contested political issues such as the rights of the enemies of the state, the constitutional status of the state of emergency, citizenship rights, and challenges of European integration. His writings have shaped not only academic but also wider public debates from the 1950s to the present, to an extent that few European scholars can match. As a federal constitutional judge and thus holder of one the most important and most trusted public offices, Böckenförde has influenced the way in which academics and citizens think about law and politics. During his tenure as a member of the Second Senate of the Federal Constitutional Court, several path-breaking decisions for the Federal Republic of Germany were handed down, including decisions pertaining to the deployment of missiles, the law on political parties, the regulation of abortion, and the process of European integration.

In the first representative edition in English of Böckenförde's writings, this volume brings together his essays on constitutional and political theory. The volume is organized in four sections, focusing respectively on (I) the political theory of the state; (II) constitutional theory; (III) constitutional norms and fundamental rights; and (IV) the relation between state, citizenship, and political autonomy. Each of these feature introductions to the articles as well as a running editorial commentary to the work. A second volume will follow this collection, focusing on the relation between religion, law, and democracy.