The Chimpanzees of the Tai Forest: Behavioural Ecology and Evolution 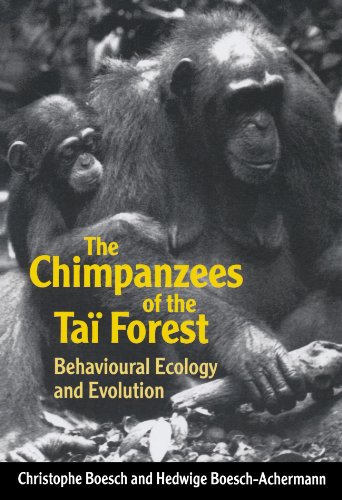 As natural history with an agenda, it doesn"t get any better than this (Ethology)

Combining careful scientific observation with a store of entertaining anecodotes, this is a lively and readable book. It also succeeds in shedding light on some of the central questions around the evolutionary relationship between primates, and in particular the affinity between chimpanzees and humans"R Human Evolution

The chimpanzees are the closest living evolutionary relatives to our own species, Homo sapiens. As such, they have long exerted a fascination over those with an interest in human evolution, and what makes humans unique. Chrisophe Boesch and Hedwige Boesch-Acherman undertook an incredible observational study of a group of wild chimpanzees of the Tai forest in Cote D'Ivoire, spending some fifteen years in the West African jungle with them. This fascinating book is the result of these years of painstaking research among the chimps. Chimpanzee behaviour is documented here in all its impressive diversity and variety. Aggression, territoriality, social structure and relationships, reproductive strategies, hunting, tool use - each of these is given its own chapter, along with topics such as chimp intelligence, life histories, and demography. The authors take care to place their observations within the broader context of research in behavioural ecology, and to compare and contrast their findings with other important work on chimpanzee groups, such as that by Jane Goodall. The book concludes with a summary chapter relating the chimpanzee findings to our understanding of human evolution. Combining careful scientific observation with a store of entertaining anecdotes, this is a lively and readable book. It also succeeds in shedding light on some of the central questions around the evolutionary relationships between the primates, and in particular the affinity between chimpanzees and humans. 'This is a major contribution to the study of the great apes, and a significant addition to debates about human/ape evolution. It has all the makings of a classic monograph.'