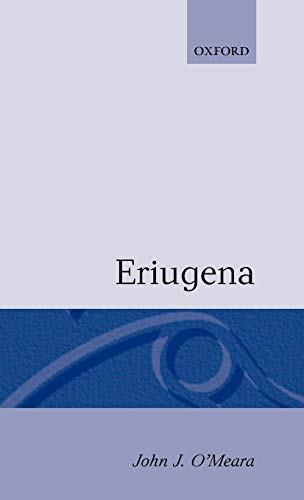 `It will be widely welcomed for the deep grasp of Eriugena's thought which manifests and communicates, for its comprehensive range, its mastery of a voluminous secondary literature, and the didactic skill which is everywhere in evidence.' J.McEvoy, English historical Review.

'O'Meara's study is highly informative, well written and rigorously researched. It is also a timely contribution to the Irish cultural debate.' The Irish Times

'there is really nowhere to go to find a reliable account of what little is known of Eriugena and a succinct discussion of his ideas. This book admirably fills that gap: it is, in fact, the first proper book on Eriugena ... since Dom Cappuyns's fundamental work published in 1933 ... This is an enormously valuable book, bringing together a great deal of otherwise rather scattered information, and giving a reasonably clear picture of Eriugena's fundamental ideas.' Andrew Louth, Downside Review

'this book is a model of what such an introduction should be: clear, concise, and covering all the important questions' Thomas O'Loughlin, Studies

This book deals with Johannes Scottus Eriugena, an Irish scholar at the Court of Charles the Bald in France in the second half of the ninth century - to be clearly distinguished from John Duns Scotus (1264-1308), after whom `Scotist' philosophy is named.

Eriugena's main work, Periphyseon (de divisione naturae), is a remarkable attempt at a real intellectual synthesis between the Bible and Neoplatonist philosophy. It was not looked upon with great favour in the West except by the mystics and, more recently, by German Idealist philosophers of the last century. Now, however, because of the growth of interest in Medieval Studies, there is an increasing curiosity about Eriugena and his work - but there has been no comprehensive book about him since that of M. Cappuyns in 1933.

Bringing together the results of the most recent research on Eriugena, this book discusses his background in Ireland and life in France, and of his career as teacher, controversialist, translator, and poet. It gives an extended and careful summary of the Periphyseon, and the first translation into English of the brief Homily on the Prologue to St.John's Gospel.