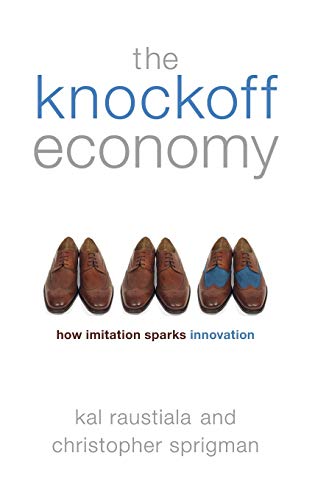 "Raustiala and Sprigman have some good news: copying and creativity can co-exist. Using extensive industry case studies of fashion, fonts, jokes, recipes, and other sectors, they remind us that a coherent intellectual property policy inherently involves trading off protection and imitation. Let us hope that policymakers get the message and restore balance to our intellectual property system." -Hal Varian, Chief Economist, Google "Policymakers still-astonishingly-have a mistake at the core of their understanding of how innovation happens. This beautifully written and brilliant book by two of America's most creative thinkers corrects that mistake, and launches an incredibly important project to understand just how much law creativity requires." -Lawrence Lessig, author of Remix and The Future of Ideas "Kal Raustiala and Christopher Sprigman have written a fascinating look at the surprising relationship between creating and copying. It's amazing to see the parallels across industries as diverse as cuisine, comedy and football." -David Chang, Chef/Owner of Momofuku "The Knockoff Economy is the most entertaining portent of doom I've read in a long time." -Patton Oswalt, stand-up comedian and actor "This book shines a powerful searchlight onto some neglected aspects of the intellectual property field, in the process revealing some fascinating insights that require us to rethink past assumptions about the incentives to create." -David Nimmer, author of Nimmer on Copyright

From the shopping mall to the corner bistro, knockoffs are everywhere in today's marketplace. Conventional wisdom holds that copying kills creativity, and that laws that protect against copies are essential to innovation―and economic success. But are copyrights and patents always necessary? In The Knockoff Economy, Kal Raustiala and Christopher Sprigman provocatively argue that creativity can not only survive in the face of copying, but can thrive.

The Knockoff Economy approaches the question of incentives and innovation in a wholly new way―by exploring creative fields where copying is generally legal, such as fashion, food, and even professional football. By uncovering these important but rarely studied industries, Raustiala and Sprigman reveal a nuanced and fascinating relationship between imitation and innovation. In some creative fields, copying is kept in check through informal industry norms enforced by private sanctions. In others, the freedom to copy actually promotes creativity. High fashion gave rise to the very term "knockoff," yet the freedom to imitate great designs only makes the fashion cycle run faster―and forces the fashion industry to be even more creative.

Raustiala and Sprigman carry their analysis from food to font design to football plays to finance, examining how and why each of these vibrant industries remains innovative even when imitation is common. There is an important thread that ties all these instances together―successful creative industries can evolve to the point where they become inoculated against―and even profit from―a world of free and easy copying. And there are important lessons here for copyright-focused industries, like music and film, that have struggled as digital technologies have made copying increasingly widespread and difficult to stop.

Raustiala and Sprigman's arguments have been making headlines in The New Yorker, the New York Times, the Financial Times, the Boston Globe, Le Monde, and at the Freakonomics blog, where they are regular contributors. By looking where few had looked before―at markets that fall outside normal IP law―The Knockoff Economy opens up fascinating creative worlds. And it demonstrates that not only is a great deal of innovation possible without intellectual property, but that intellectual property's absence is sometimes better for innovation.