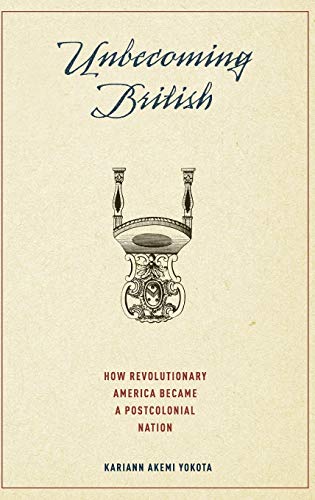 What can textiles, teapots, quince jam-and a moose carcass that Thomas Jefferson had shipped to France-reveal about the formation of early US national identity? In this wide-ranging and original study, Kariann Yokota combines a rigorous examination of material objects with insights from postcolonial theory to propose a bold new interpretation of American history.

Although independence from Britain entailed certain freedoms, it also fueled, among the Founding Fathers and other post-colonial creole elites, anxieties about cultural inferiority and race. Caught between their desire to emulate "civilized¨Europe and an awareness that they lived at the periphery of the civilized world, they went to great lengths to convince themselves and others of their refinement. And yet they had to rely on Britain and China to supply their patriotic tableware, European cartographers who had never set foot in the Americas for their maps, and industrial spies to help establish American manufactures. In the eyes of contemporary diarists, travelers, scientists, and collectors, both American and European, the post-revolutionary elite exhibited a certain backwardness and gullibility: why else would they purchase out-of-fashion silk or pay for shipments of broken housewares? But what really distinguished the new nation, according to these observers, were its unlimited natural resources, the widespread presence of slavery, and non-white societies alternately viewed as "savage¨and "noble.¨

Yokota examines a wealth of evidence from the fields of geography, decorative arts, intellectual history and technology to suggest that the process of Unbecoming British was not an easy one. Far from having its footing or its future secure, the new nation struggled to define itself economically, politically and culturally in the years between the first and the second American revolution, the War of 1812. Out of this confusion of hope and exploitation, insecurity and vision, emerged a uniquely American national identity.