Verwandte Artikel zu The Rise and Fall of the American Century: The United...

Chafe, William H. The Rise and Fall of the American Century: The United States from 1890-2009

The Rise and Fall of the American Century: The United States from 1890-2009 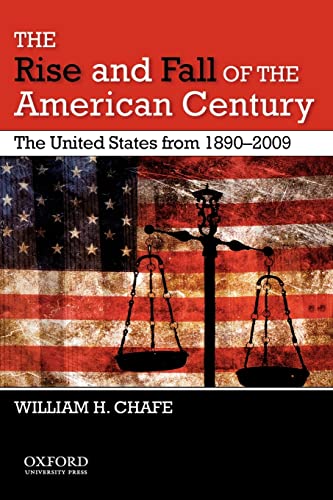 Without question Chafe is a master narrative historian able to weave together multiple histories into one compelling drama of struggle (of competing ideas, values, and visions of what made the American century 'American.' Chafe knows how to write history as drama in the best sense of that word. I couldn't put it down. Students will not find this kind of writing on Wikipedia."-Neil Foley, University of Texas, and author of The White Scourge)

The Rise and Fall of the American Century is an excellent work that touches upon practically all of the major themes and issues of twentieth-century American history with authorial conviction. Perhaps its greatest strength is the author's ability to humanize presidents, the presidency, and presidential politics. The writing is beyond impressive and will capture and hold the attention of college students. (Hasan Kwame Jeffries, The Ohio State University)

In this unflinching examination of the United States over the last century, one of the nation's foremost historians traces the nation's rise to power and its disastrous recent decline. William H. Chafe illuminates the national story with keen insight, elegant prose, and powerful analysis. (Elaine Tyler May, author of Homeward Bound: American Families in the Cold War Era)

One of this country's most distinguished historians, Bill Chafe is at the top of his game as he examines the complexities and paradoxes of American life in this remarkable book. (John Dittmer, author of Local People: The Struggle for Civil Rights in Mississippi)

From William H. Chafe, the best-selling author of The Unfinished Journey, comes a new text that offers in-depth and enlightening coverage of the history of the United States in the twentieth century. The Rise and Fall of the American Century: The United States from 1890-2010 describes the rise―and potential fall―of the U.S., a nation more powerful, more wealthy, and more dominant than any in human history. It also acknowledges the persistent challenges the U.S. has faced and continues to face―inequalities of race, gender, and income that contradict its vision of itself as "a land of opportunity."
Examining the evolution of the United States since 1890, The Rise and Fall of the American Century chronicles the varying mood of the country through its changing presidencies, from the rise of the metropolis and Teddy Roosevelt in the 1890s to the turbulent era of the Bush administration at the beginning of the twenty-first century. By analyzing the shifting moods and social and political upheavals (both at home and abroad) and the United States's reactions to these events, the book seeks to understand how the country both achieved its vision for itself in some ways but failed to realize it in others. Working in a political framework, Chafe also provides a strong balance of social and cultural history, touching on the African-American, Latino, and Asian communities, the West, and the changing status of women. The book's epilogue discusses important economic and political events through 2008, including the financial crisis and the 2008 Presidential Election.