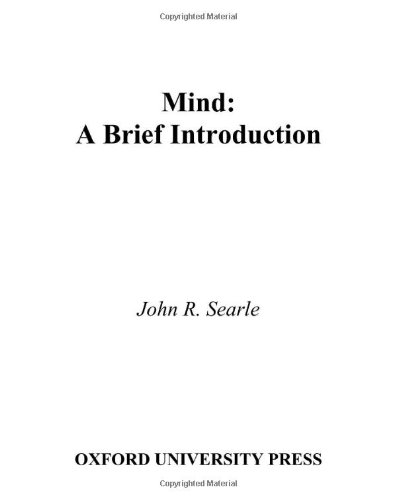 Searle's deeply thought-out naturalism and ontological realism are refreshing and his arguments are rigorous and compelling, which makes this a highly engaging and brilliant piece of philosophical writing for any serious reader to enjoy. (Maria Antonietta Perna, University College London)

"The philosophy of mind is unique among contemporary philosophical subjects," writes John Searle, "in that all of the most famous and influential theories are false." In Mind, Searle dismantles these famous and influential theories as he presents a vividly written, comprehensive introduction to the mind. Here readers will find one of the world's most eminent thinkers shedding light on the central concern of modern philosophy. Searle begins with a look at the twelve problems of philosophy of mind--which he calls "Descartes and Other Disasters"--problems which he returns to throughout the volume, as he illuminates such topics as the freedom of the will, the actual operation of mental causation, the nature and functioning of the unconscious, the analysis of perception, and the concept of the self. One of the key chapters is on the mind-body problem, which Searle analyzes brilliantly. He argues that all forms of consciousness--from feeling thirsty to wondering how to translate Mallarmé--are caused by the behavior of neurons and are realized in the brain system, which is itself composed of neurons. But this does not mean that consciousness is nothing but neuronal behavior. The main point of having the concept of consciousness, Searle points out, is to capture the first person subjective features of the phenomenon and this point is lost if we redefine consciousness in third person objective terms. Described as a "dragonslayer by temperament," John Searle offers here a refreshingly direct and open discussion of philosophy, one that skewers accepted wisdom even as it offers striking new insights into the nature of consciousness and the mind.