Mass of the Children: Vocal Score

Mass of the Children: Vocal Score 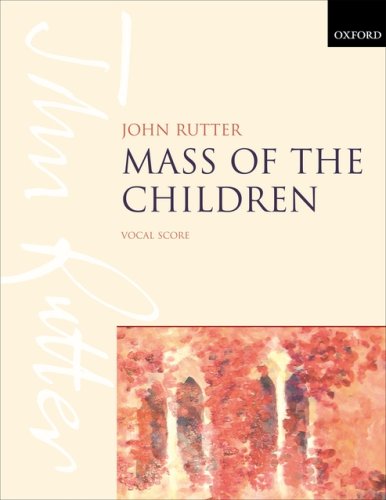 . . . the colourfully contrasted movements conclude with a mellifluous Agnus Dei combined with Tallis's Canon sung by the children's choir. It will appeal to many choirs looking for a longer work in Rutter's characteristic and accessible style. (Alan Bullard, Mastersinger, Spring 2004)

The sections for children's choir are often self-contained, short sections - the children very rarely have to sing an independent part at the same time as the mixed choir. This means that despite the challenges of range (and dividing into two or three parts in places) it would certainly be possible to teach a children's choir this piece, working on one section at a time. When the children's choir do sing with the mixed choir they tend to have the tune, and are accompanied by thge adult singers. One of the high points for me is the lively Gloria in 5/8; with its catchy melody and driving rhythms it is reminiscent of the theme from an epic Western. Another high point is the middle section of the Agnus Dei where the children's choir sing a simple but moving setting of William Blake's 'Little Lamb who made thee?'. (Church Music Quarterly March 04)

At first glance, John Rutter's large-scale concert work, Mass of the Children, prompts comparisons with Britten: paired children's and adult choirs, interleaved liturgical and non-liturgical texts (War Requiem) and the appearance of Tallis' canon in the final movement (Noye's Fludde) . . . However, it would be entirely wrong to suggest that this work is a slavish imitation of Britten. Rutter's great gift is to be able to synthesise a wide range of influences into a style that is unmistakably his own. Those who appreciate his particular flair for melody, his liking for asymmetric rhythmic patterns, will not be disappointed with Mass of the Children. (Christopher Field, Music Teacher, February 2004)

for soprano and baritone soloists, children's choir, adult choir, and orchestra or chamber ensemble The text is that of a standard Latin Missa brevis, to which several relevant English poetic texts have been added. The first and last of these are taken from Bishop Thomas Ken's renowned morning and evening hymns for the scholars of Winchester College. They give the whole work the framework of a complete day, from waking to sleeping, within which other texts and moods appear like events in that day or landmarks in a life. Vocal scores are available on sale or on hire. Instrumental material is available on hire.

1. Mass of the Children: Vocal Score

2. Mass of the Children: Vocal Score