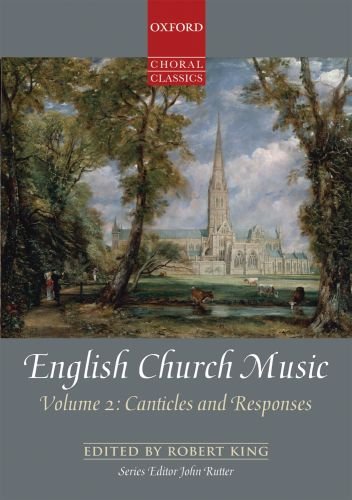 [English]
Oxford Choral Classics: English Church Music assembles in two volumes around 100 of the finest examples of English sacred choral music. The second volume presents a wealth of service material suitable for use throughout the year. The evening canticles are given due space, with seventeen settings, including those by Byrd, Gibbons, Purcell, Walmisley, Stanford, Noble, Howells, Walton, and Tippett. Also included are settings of the Te Deum and Jubilate Deo, alongside seven settings of the Preces and Responses and two additional early Lord's Prayers. The selection is completed with three supplementary items: a set of previously unpublished Psalm chants by Howells, John Sanders's Good Friday Reproaches, and a written-out Order for Compline.

Robert King has prepared completely new editions of all the pre-twentieth-century works, going back to the earliest and most reliable manuscripts or printed sources. Playable keyboard reductions have been added for the majority of unaccompanied items.

This 'Evensong' volume is a tremendous publication: carefully chosen, authoritatively presented, and extremely good value for money . . . Everyone with any interest in this repertoire will have their own ideas about questionable inclusons and regrettable omissions but the selection is solid . . . This anthology is excellent, and its attention to detail is gratifying . . . This is a magnificent volume. Durability of anthologies is a perennial cause for concern, but my copy of European Sacred Music is still in good nick after 15 years of heavy use; English Church Music vol. 2 should prove similarly imperishable. (Jeremy Summerly, Choir & Organ March 2012)

But those who do buy it will greatly benefit, as there are insights throughout, from the beginning (Blair's B minor service in its original form rather than Atkins' rewriting as normally sung) to the final Preces and Responses (Stone and Tomkins, both with new reconstructions of their missing parts). (Church Music Quarterly, June 2012)

This is quite a bold move in the series. English and Latin church music is often sung in concert as well as in church, but it is rare for Anglican services to be sung thus. I'm not very sure why, since a morning or evening service is shorter than a mass and enables programmes to be more flexible . . . I hope that this sells well to collegiate and cathedral choirs, and other emulate them. As always with the series, the layout is excellent, the biographical and editorial comments are the right level, and I trust John Rutter's proof-reading to make it unnecessary to do spot checks. (Clifford Bartlett, Early Music Review)

For 30 years Robert King has enjoyed a busy career as a conductor, festival director, and editor. He read music at Cambridge, where in 1980 he founded the period instrument orchestra and choir The King's Consort. TKC has since toured across the globe, made almost 100 recordings, and won many international awards. King has conducted many of the leading orchestras and chamber choirs of Europe and North America, as well as operas in Japan, Britain, France, Germany, and Spain. He has written and presented for the BBC, been artistic director of music festivals in Sweden, Germany, and the UK, and contributed to the scores of Hollywood films including Shrek 2, Pirates of the Caribbean, Flushed Away, and The Da Vinci Code. Renowned as an expert in Baroque and Classical music, King has created performing editions of more than 100 works, which are used by professional and amateur performers across the world. John Rutter was born in London in 1945 and studied music at Clare College, Cambridge. His compositions embrace choral, orchestral, and instrumental music, and he has edited or co-edited various choral anthologies, including four Carols for Choirs volumes with Sir David Willcocks and the Oxford Choral Classics series. From 1975 to 1979 he was Director of Music at Clare College, and in 1981 he formed his own choir, the Cambridge Singers. He now divides his time between composition and conducting and is sought after as a guest conductor for the world's leading choirs and orchestras. John Rutter's music has been widely recorded and is available on many record labels including Universal, Naxos, and Hyperion. The Cambridge Singers have recorded many of John Rutter's works on the Collegium Records label.