Verwandte Artikel zu The Oxford History of Board Games

Parlett, David The Oxford History of Board Games

The Oxford History of Board Games 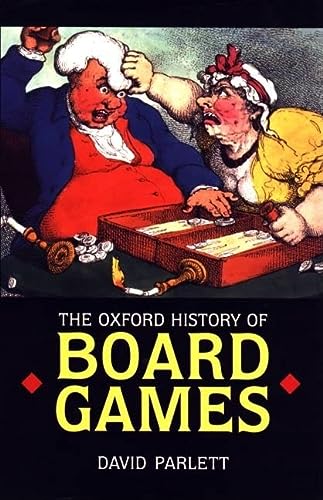 For thousands of years, people have been planning attacks, captures, chases, and conquests - on a variety of different boards designed for an astonishing diversity of games. The compelling mix of strategy, skill, and chance is as strong as ever; new board games are invented almost daily, while the perennial favourites continue to attract new devotees and reveal new possibilities. This book investigates the principles of board games throughout the ages and across the world, exploring the fascinating similarities and differences that give each its unique appeal, and drawing out the significance of game-playing as a central part of human experience - as vital to a culture as its music, dance, and tales. In his trade-mark accessible, entertaining style, David Parlett looks at the different families of games: games based on configuration or connection, races or chases, wars or hunts, capture or blockade. He focuses mainly on traditional games, the folk entertainments that have grown up organically through the centuries, and which exhibit endless local variations, although he discusses also the commercial products that have tried, with varying degrees of success, to match their astonishing popularity. This is not primarily a how-to book, although the rules and strategies of certain games are discussed in detail, neither does it offer sure-fire tips for success, although with a fuller understanding of a game the reader will undoubtedly become a better-informed, if not better, player. Rather, it is an affectionate and authoritative survey of one of the most familiar parts of our cultural history, which has until now been inexplicably neglected.

David Parlett is a games expert of international reputation. A former editor of Games & Puzzles magazine, he has written many books on card and word games, and has himself invented many games, including Hare & Tortoise, which has been published in ten languages and won many awards, including Germany's prestigious Game of the Year award for 1979.