Verwandte Artikel zu The Oxford Dictionary of the Christian Church

The Oxford Dictionary of the Christian Church

The Oxford Dictionary of the Christian Church 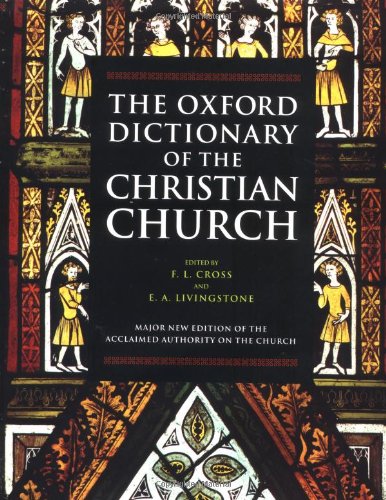 The Oxford Dictionary of the Christian Church, since its first appearance in 1957, has established itself as the indispensable one-volume reference work on all aspects of the Christian Church. This third edition, the first for over twenty years, builds on the unrivalled reputation of the previous editions. Revised and updated, it reflects changes in academic opinion and Church organisation. There is increased coverage of the Eastern Churches, certain issues in moral theology, and developments stemming from the Second Vatican Council. Numerous new entries have been added and the extensive bibliographies have been brought up to date. Readers are provided with over 6,000 authoritative cross-referenced A-Z entries covering all aspects of the subject, including: * Theology - the development of doctrines in different Churches; heretical movements and spirituality and their exponents; history of the Reformation and Counter-Reformation; discoveries of Nag Hammadi and their significance for Gnosticism. * Patristic scholarship - Fathers of the Church on whose work later theology is founded are covered in detail, for example, the problems of Macarius of Egypt and Macarius/Simeon are elucidated; the recently discovered Sermons of St Augustine are listed. * Churches and denominations - the beliefs and structures of both the mainstream and the lesser known denominations, such as Lutherans, Shakers, Amish, Muggletonians, and Wee Frees; lengthy articles on the history of Christianity throughout the world, in countries such as Ireland, Spain, Poland, Canada, New Zealand, Angola, Zaire, the Philippines. * The Church calendar and organisation - feast and saints' days; Sacraments; church services, offices, rites, and practices; canon law including Catholic revision; councils and synods; religious orders. * Biographical entries - these are wide-ranging and include saints, popes, patriarchs, and archbishops; mystics, heretics, and reformers; theologians and philosophers with a summary of their opinions; artists, poets, and musicians whose work has been influenced by Christianity. * New entries - Arator; Liberation Theology; Ludwig Wittgenstein; ordination of women; Christian attitudes to Jews; Christianity in Vietnam; The Quest of the Historical Jesus; the ethics of contraception, procreation, and abortion.

E. A. Livingstone was involved in the first edition and assumed the editorship of the second on the death of F.L. Cross. She has been responsible for the organization of the International Conferences on Patristic Studies from 1971 to 1995 and has edited the proceedings. The late F.L. Cross was the Lady Margaret Professor of Divinity at the University of Oxford from 1944 to 1968.

1. The Oxford Dictionary of the Christian Church. Third Edition.