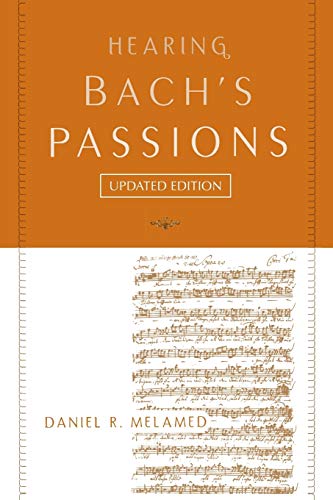 Melamed has a user-friendly prose stlye.... the picture he draws is a useful corrective, and there are apercus and helpful observations. (Peter Williams, Times Literary Supplement)

an enormously useful guide to the issues around current research and performance ... performers and listeners alike will learn something they did not know from this brief work, and the publishers should be congratulated on this revision and reprint. (David Stancliffe)

A comprehensive introduction not only to the issues confronting scholars and performers of Bach's music in the early twenty-first century, but also to the wider field of musicology and its potential contribution to the experience of modern audiences. Daniel R. Melamed's engaging prose is at once concise and informative, and the often complex, esoteric ideas he tackles are made to appear accessible and even familiar. Hearing Bach's Passions will be engaging and though-provoking for specialists and non-specialists alike, and essential reading for anyone looking for an accessible introduction to Bach's sacred music and the issues surrounding its scholarly interpretation and performance. (Music and Letters)

A very readable, helpful book for any listener of Bach's music. It will be of great assistance to performers of that music as they make decisions that will affect their performance. (Cross Accent)

Hearing Bach's Passions, a slim but rich volume, is at once scholarly and accessible. Richly detailed enough for the musicologist to appreciate, the book is aimed primarily at the non-specialist, and contains no systematic analysis of musical sources, no printed musical examples, and no footnotes or endnotes. Melamed's goal is threefold: first, to discuss how we hear these works in our own time; second, to explore how listeners in the eighteenth century might have heard them; and third, to suggest ways to bridge that temporal gulf. (Bach Notes)

Melamed's book belongs to that group of writings on Bach's Passions that are accessible to a general audience while at the same time offering valuable additions to scholarship. Moreover, Melamed constructs a sophisticated response to the many persistent and fiercely guarded myths surrounding the Passion repertory associated with Bach. (Notes)

An erudite and sophisticated examination of the passions. As pleasurable to read as the many insights into Bach and his world are absorbing. His concern is to enrich our understanding of these works by clarifying aspects of their original purpose and meaning, leaving us to wonder at how such artefacts from the past manage to transform themselves into works of the utmost importance to us today. (Early Music Performer)

Written in clear prose that is highly accessible to the non-specialist, Melamed ... has provided readers with a scholarly work that requires no technical musical knowledge ... Based on the most recent scholarship the book opens up the debates surrounding this repertory to music lovers, choral singers, church musicians, and students of Bach's music. (Horace Mann Magazine)

Johann Sebastian Bach's two surviving passions―St. John and St. Matthew―are an essential part of the modern repertory, performed regularly both by professional ensembles and amateur groups. These large, complex pieces are well loved, but due to our distance from the original context in which they were performed, questions and problems emerge. Bach scholar Daniel Melamed examines the issues we encounter when we hear the passions performed today, and offers unique insight into Bach's passion settings.

Rather than providing a movement-by-movement analysis, Melamed uses the Bach repertory to introduce readers to some of the intriguing issues in the study and performance of older music, and explores what it means to listen to this music today. For instance, Bach wrote the passions for a particular liturgical event at a specific time and place; we hear them hundreds of years later, often a world away and usually in concert performances. They were performed with vocal and instrumental forces deployed according to early 18th-century conceptions; we usually hear them now as the pinnacle of the choral/orchestral repertory, adapted to modern forces and conventions. In Bach's time, passion settings were revised, altered, and tampered with both by their composers and by other musicians who used them; today we tend to regard them as having fixed texts to be treated mith respect. Their music was sometimes recycled from other compositions or reused itself for other purposes; we have trouble imagining the familiar material of Bach's passion settings in any other guise.

Melamed takes on these issues, exploring everything from the sources that transmit Bach's passion settings today to the issues surrounding performance practice (including the question of the size of Bach's ensemble). He delves into the passions as dramatic music, examines the problem of multiple versions of a work and the reconstruction of lost pieces, explores the other passions in Bach's performing repertory, and sifts through the puzzle of authorship.
Highly accessible to the non-specialist, the book assumes no technical musical knowledge and does not rely on printed musical examples. Based on the most recent scholarship and using lucid prose, the book opens up the debates surrounding this repertory to music lovers, choral singers, church musicians, and students of Bach's music.