Chasing the American Dream: Understanding What Shapes Our Fortunes 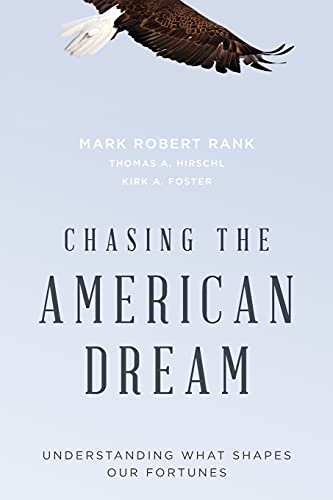 This engaging and thought-provoking combination of thorough scholarship, narrative journalism, and policy analysis will resonate with readers interested in understanding American poverty and opportunity." - Library Journal

Chasing the American Dream is accessible to those who do not have a sociology background. It is also relatively free of academic jargon, easy to read, and provides a wide variety of evidence. Moreover, the text offers a wide range of interesting and useful policy suggestions ... Overall, this book is quite compelling and is useful for cultural studies scholars as a context for understanding how the rhetorical concept of "The American Dream" has stayed relatively static-and immensely powerful-amidst ever-changing social and economic conditions. (Patrick Kent Russell, Journal of American Culture)

Rank and his colleagues achieve two important tasks in this book. They describe, in the words of average Americans whom they interviewed, what the 'American Dream' means. And then they show, through creative analyses of the hard data, how much that dream is being thwarted by the political economy of 21st century America. It makes for a poignant contrast. (Claude S. Fischer, PhD, Professor of Sociology, University of California, Berkeley)

Over the last generation, the ideal of the American Dream and the reality of the American economy have increasingly clashed. In this informed, and engagingly written book, Mark Rank takes us deep into the minds and lives of Americans of all walks of life as they build-and sometimes watch crumble-their own dreams. A powerful portrait of the ups and downs of a riskier and more unequal economy. (Jacob Hacker, PhD, Stanley B. Resor Professor Political Science; Director, Institution for Social and Policy Studies; Yale University)

In his exceptionally important new book, Chasing the American Dream, Mark Rank shows how rising economic inequality has distorted the meaning of the American dream and circumscribed the opportunities of ordinary Americans. Rank combines interview and focus groups with the life history method he pioneered in earlier work to show the astonishing rate at which individuals move in and out of poverty and affluence and how initial advantages and disadvantages translate into patterns of cumulative inequality which define their lives. Written with exceptional clarity, illustrated with vivid individual stories, this book will engage scholars, students, and non-specialist readers who want to know what is happening to the elusive American dream. (Michael B. Katz, PhD, University of Pennsylvania, author of The Undeserving Poor: America's Enduring Confrontation with Poverty)

The United States has been epitomized as a land of opportunity, where hard work and skill can bring personal success and economic well-being. The American Dream has captured the imagination of people from all walks of life, and to many, it represents the heart and soul of the country. But there is another, darker side to the bargain that America strikes with its people ― it is the price we pay for our individual pursuit of the American Dream. That price can be found in the economic hardship present in the lives of millions of Americans.

In Chasing the American Dream, leading social scientists Mark Robert Rank, Thomas A. Hirschl, and Kirk A. Foster provide a new and innovative look into a curious dynamic ― the tension between the promise of economic opportunities and rewards and the amount of turmoil that Americans encounter in their quest for those rewards. The authors explore questions such as:

-What percentage of Americans achieve affluence, and how much income mobility do we actually have?
-Are most Americans able to own a home, and at what age?
-How is it that nearly 80 percent of us will experience significant economic insecurity at some point between ages 25 and 60?
-How can access to the American Dream be increased?

Combining personal interviews with dozens of Americans and a longitudinal study covering 40 years of income data, the authors tell the story of the American Dream and reveal a number of surprises. The risk of economic vulnerability has increased substantially over the past four decades, and the American Dream is becoming harder to reach and harder to keep. Yet for most Americans, the Dream lies not in wealth, but in economic security, pursuing one's passions, and looking toward the future. Chasing the American Dream provides us with a new understanding into the dynamics that shape our fortunes and a deeper insight into the importance of the American Dream for the future of the country.