Violence at the Urban Margins (Global and Comparative Ethnography)

Violence at the Urban Margins (Global and Comparative Ethnography) 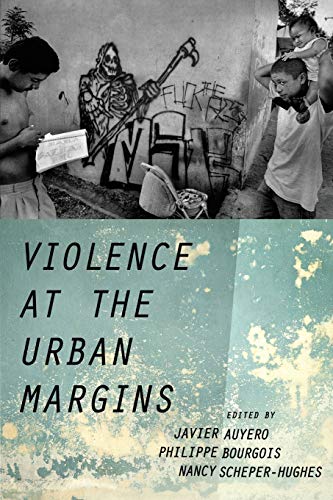 Violence at the Urban Margins is an excellent collection of cutting-edge ethnography on the brutality of everyday life in impoverished areas across the Americas. Auyero, Bourgois, and Scheper-Hughes are among the greatest contemporary scholars of violence, and here they've assembled work from the most important new voices in the field. It's an excellent resource for students, faculty, and anyone else interested in understanding the lived experience of urban outcasts in an increasingly unequal world (Eric Klinenberg, Professor of Sociology, New York University)

This esteemed group of international scholars brings 'the margins' into the core of contemporary research. A compelling tour de force, Violence at the Margins takes us into the homes, streets, institutions and personal lives of those wielding, suffering, and combatting violence to shed light on power/lessness across global expressions. Weaving together multidisciplinary perspectives, this book adds compelling depth and dimensionality to the literature working to understand violence and its alternatives in the world today. (Carolyn Nordstrom, Professor of Anthropology, University of Notre Dame)

Violence at the Margins sets the tone for powerful anthropological interpretations of brutality, fear, and suffering among the poor and marginalised populations of North and South America. (Howard Campbell, Anthropological Forum)

In the Americas, debates around issues of citizen's public safety―from debates that erupt after highly publicized events, such as the shootings of Jordan Davis and Trayvon Martin, to those that recurrently dominate the airwaves in Latin America―are dominated by members of the middle and upper-middle classes. However, a cursory count of the victims of urban violence in the Americas reveals that the people suffering the most from violence live, and die, at the lowest of the socio-symbolic order, at the margins of urban societies.

However, the inhabitants of the urban margins are hardly ever heard in discussions about public safety. They live in danger but the discourse about violence and risk belongs to, is manufactured and manipulated by, others―others who are prone to view violence at the urban margins as evidence of a cultural, or racial, defect, rather than question violence's relationship to economic and political marginalization. As a result, the experience of interpersonal violence among the urban poor becomes something unspeakable, and the everyday fear and trauma lived in relegated territories is constantly muted and denied.

This edited volume seeks to counteract this pernicious tendency by putting under the ethnographic microscope―and making public―the way in which violence is lived and acted upon in the urban peripheries. It features cutting-edge ethnographic research on the role of violence in the lives of the urban poor in South, Central, and North America, and sheds light on the suffering that violence produces and perpetuates, as well as the individual and collective responses that violence generates, among those living at the urban margins of the Americas.