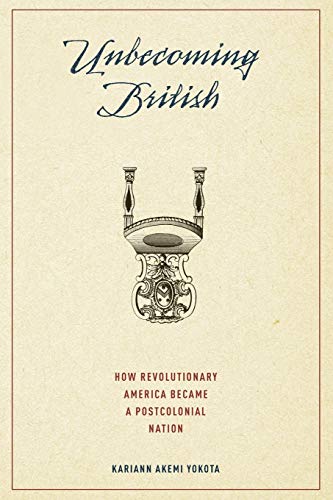 Novel and engaging...It emphasizes the ambivalent relationship of Americans toward Britain and their continued dependence upon Britain. Unbecoming British is written without jargon, making it very suitable both for class adoption and interested lay readers. (Andrew Jackson O'Shaughnessy, American Historical Review)

Yokota's far-reaching reconsideration of the raw materials Americans proffered global markets, including the knowledge economy, offers a fresh perspective that should alter the questions authors in her wake ask about transatlantic resonance and implications of objects in their own fields of vision. (Marla R. Miller, William and Mary Quarterly)

Unbecoming British is an excellent addition to the important research on collective American identity. In this interdisciplinary transatlantic study, Kariann Akemi Yokota carefully examines how Americans transformed from a colonial British identity to an independent American identity. (Stephanie Kermes, Journal of American History)

In her extensively researched and well-written book that will inspire, inform, and even entertain scholars across disciplines, Yokota breaks new ground by applying perspectives derived from postcolonial thought. Highly recommended. (CHOICE)

An important and sensitive study of the efforts of postcolonial Americans in the decades immediately following independence to become a cultivated and respectable nation. Kariann Yokota imaginatively uses maps, geographies, botanical studies, British consumer goods, and other particulars to document the arduous struggles of a people who so recently thought of themselves as British to become truly independent. It's an extraordinary work of cultural history."-Gordon S. Wood, author of Empire of Liberty: A History of the Early Republic, 1789-1815

This entrancing meditation on post-Revolutionary America's pursuit of cultural independence examines the perplexities of cutting loose from the nation that for two centuries had set the standards of civilization for the colonies. Unbecoming British traces this struggle through published geographies, imports of genteel goods, the China trade, natural history and medicine, and the creation of racial identity. There is no more far-reaching or penetrating survey of post-colonial American nationalism than this."-Richard Bushman, author of The Refinement of America: Persons, Houses, Cities

Convincing, thought-provoking, and tremendously original, Unbecoming British captures exquisitely the ambivalence of the post-revolutionary United States. An exquisite book-a landmark work that defines an area of inquiry, and even a cultural formation, that was right under our noses if only we had noticed. It does what the best works of cultural history do best: suddenly so many episodes, persons, artifacts, and expressions seem more interesting, and comprehensible."-David Waldstreicher, Temple University

"Remarkably learned across disciplines and continents, this boldly argued study lets us see the post-revolutionary United States anew. Struggling to make and have things the world would not ridicule, and seeking to purchase civilization even during moments of nationalist fervor, the Founding Fathers shopped for approval in China, Scotland, France, Germany, and, with considerable pathos, in London. Yokota delivers brilliantly on the promises of transnational history. "-David Roediger, How Race Survived U.S. History

American identity took decades to form, and it was complicated and difficult...."Unbecoming British" shows how this process was brightly reflected in material and intellectual culture, rather than the traditional markers of American pride such as the flag, the veneration of George Washington and the Fourth of July. (Joseph Coohill, Pittsburgh Post-Gazette)

What can homespun cloth, stuffed birds, quince jelly, and ginseng reveal about the formation of early American national identity? In this wide-ranging and bold new interpretation of American history and its Founding Fathers, Kariann Akemi Yokota shows that political independence from Britain fueled anxieties among the Americans about their cultural inferiority and continuing dependence on the mother country. Caught between their desire to emulate the mother country and an awareness that they lived an ocean away on the periphery of the known world, they went to great lengths to convince themselves and others of their refinement. Taking a transnational approach to American history, Yokota examines a wealth of evidence from geography, the decorative arts, intellectual history, science, and technology to underscore that the process of "unbecoming British" was not an easy one. Indeed, the new nation struggled to define itself economically, politically, and culturally in what could be called America's postcolonial period. Out of this confusion of hope and exploitation, insecurity and vision, a uniquely American identity emerged.