McClusky, Mark Faster, Higher, Stronger: The New Science of Creating Superathletes, and How You Can Train Like Them

Faster, Higher, Stronger: The New Science of Creating Superathletes, and How You Can Train Like Them 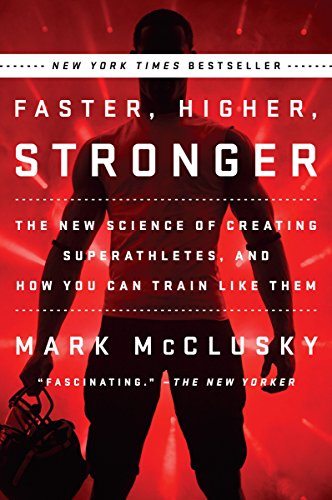 "Faster, Higher, Stronger is one of the most lucid and entertaining books I've read about sports science and how it is making better, faster, stronger athletes. More important, though, Mark McClusky clearly explains why this science matters to the rest of us and how we can use it in our lives. A smart and important book."
--Gretchen Reynolds, author of The First 20 Minutes

"Success in top-level sports is no longer just an athletic contest -- it's a learning contest that takes place on the frontiers of science, technology, and the human body. If you're interested in understanding and competing in this new world, you need to buy Mark McClusky's smart, invigorating, and useful book, right now."
--Daniel Coyle, author of The Talent Code and The Secret Race "In my more than 20 years researching the field of health and fitness, few books have captured my attention like Mark McClusky's riveting investigation of the groundbreaking science fueling elite athletic performance. Faster, Higher, Stronger breaks the code and gives everyday readers a chance to steal the cutting-edge secrets of the pros."
--Dave Zinczenko, author of Eat This, Not That "Is fatigue mostly in your head? Can built-in talent take you to the Olympics in only four years? Will big data transform how we play basketball? Faster, Higher, Stronger is a brilliant, fun report on the science of hacking your performance."
--Clive Thompson, author of Smarter Than You Think "Mark McClusky has written an enlightening, intelligent, comprehensive look at the merging of sports and science. It's truly fascinating stuff."
--Jeff Pearlman, bestselling author of Showtime "An engaging journey through the intersection of sports and science, Faster, Higher, Stronger is a must-read for armchair athletes, coaches, parents, and anyone who wants to understand human potential."
--Chris Anderson, bestselling author of The Long Tail and Makers
"Today, in sports, what you are is what you make yourself into. Innate athletic ability matters, but it's taken to be the base from which you have to ascend. Training efforts that forty years ago would have seemed unimaginably sophisticated and obsessive are now what it takes to stay in the game. Athletes don't merely work harder than they once did. As Mark McClusky documents in his fascinating new book, Faster, Higher, Stronger, they also work smarter, using science and technology to enhance the way they train and perform. It isn't enough to eat right and put in the hours. "You need to have the best PhDs onboard as well," McClusky says. This technological and analytical arms race is producing the best athletes in history."
--The New Yorker "McClusky's eye-opening account of sports science shatters outmoded training myths and heralds a revolutionary new terrain, in which the combination of high-tech methods and scientific breakthroughs designed will give the sports fan something wondrous to watch."
--Publishers Weekly "In Faster, Higher, Stronger, journalist Mark McClusky takes us into the world of athletics, looking at what differentiates winners from losers in elite competitions, from the Olympics to Formula One auto racing. The focus on extremes of excellence and performance at the margins of human capability makes a great read. The casual sportsman is not forgotten, as McClusky touches back on his own golf game to help weekend athletes relate. Marginal gains, trainability, and best fit run through the book, which is filled with engaging stories of athletes reaching the podium or missing by a hair."
--Science "Speed-skating super-suits, motion-tracking cameras, the 10,000 hour rule--it's all covered in Mark McClusky's engrossing look into how athletes use science to avoid injury, train smarter, and shatter records."
--Mother Jones "McClusky states that "every great athlete is the product of the interaction between their genetics and their effort," and he presents rigorous research with an accessible style relatable to both professional and lay readers alike. All of this trickles down to amateur athletics as well, and McClusky does a good job of relating cutting-edge science to people wanting to run their 5K a little faster or shave a few strokes off their golf handicap."
--Booklist "While most of the work is dedicated to advancements in sports science, McClusky saves the inevitable conversation of performance-enhancing drugs for the conclusion. He tries to discover the thin line between finding and utilizing scientific advantages and actual cheating. It's a difficult one to discover, but the book's overall strength is McClusky's willingness to engage those questions many sports fans have trouble navigating. This is a fascinating read about the creative--and sometimes bizarre--training techniques extreme athletes use. VERDICT: This brief but detailed tour of modern sports science will garner strong interest from athletes, sports fans, and even couch potatoes."
--Library Journal Rese±a del editor:

A smart and important book.” Gretchen Reynolds, author of The First 20 Minutes

Publications as varied as Wired, Men’s Fitness, and The New Yorker are abuzz over theNew York Times bestseller Faster, Higher, Stronger. In it, veteran journalist Mark McClusky explains how today’s top athletes are turning to advanced technology and savvy science to improve their performance. Sports buffs and readers of David Epstein and Gretchen Reynolds will want to join McClusky as he goes behind the scenes everywhere from the Olympics to the NBA Finals, from the World Series to the Tour de France, and from high-tech labs to neighborhood gyms to show how athletes at every level can incorporate cutting-edge science into their own workouts.