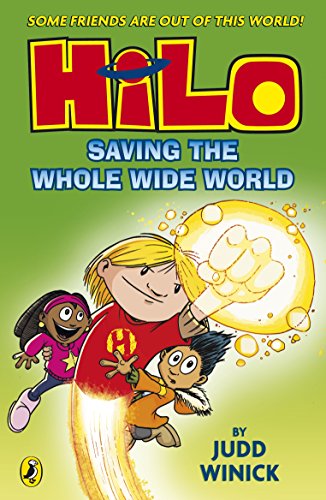 The second book in a brilliant new series perfect for fans of laugh-out-loud school adventures like Jedi Academy and Diary of a Wimpy Kid.

D.J. and Gina are TOTALLY ordinary kids. But Hilo...isn't. He's an alien robot from another world!

Hilo is just settling into life on Earth (Bowling? Knock-knock jokes? OUTSTANDING!) when strange portals begin opening up all over town and even STRANGER creatures are coming through them!

But it will take more than a GIANT MUTANT CHICKEN, A VIKING HIPPO, A MAGICAL WARRIOR CAT, or even a few million KILLER VEGETABLES to stop Team Hilo. Er, won't it...?

Can Hilo, D.J. and Gina figure out how to send these creatures back to their own worlds before they DESTROY the Earth?

Find out in HILO: SAVING THE WHOLE WIDE WORLD. Hazzah!

Today Judd lives in San Francisco with his wife, Pam Ling; their two kids; and their cats, Chaka and Sleestak. When Judd isn't collecting far more action figures and vinyl toys than a normal adult, he is a screenwriter and an award-winning cartoonist.