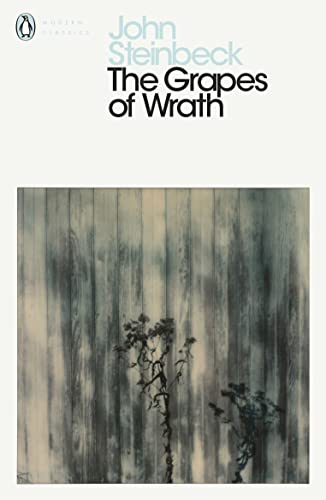 The Grapes of Wrath

Shocking and controversial when it was first published in 1939, Steinbeck's Pulitzer prize-winning epic remains his undisputed masterpiece. Set against the background of dust bowl Oklahoma and Californian migrant life, it tells of the Joad family, who, like thousands of others, are forced to travel West in search of the promised land. Their story is one of false hopes, thwarted desires and broken dreams, yet out of their suffering Steinbeck created a drama that is intensely human, yet majestic in its scale and moral vision; an eloquent tribute to the endurance and dignity of the human spirit.

To the red country and part of the gray country of Oklahoma, the last rains came gently, and they did not cut the scarred earth.'

Drought and economic depression are driving thousands from Oklahoma. As their land becomes just another strip in the dust bowl, the Joads, a family of sharecroppers, decide they have no choice but to follow. They head west, towards California, where they hope to find work and a future for their family. But while the journey to this promised land will take its inevitable toll, there remains uncertainty about what awaits their arrival . . .

Winner of the Pulitzer Prize, The Grapes of Wrath is an epic human drama, with a stunning new cover by renowned artist Bijou Karman.