A Study in Scarlet (Penguin Classics) 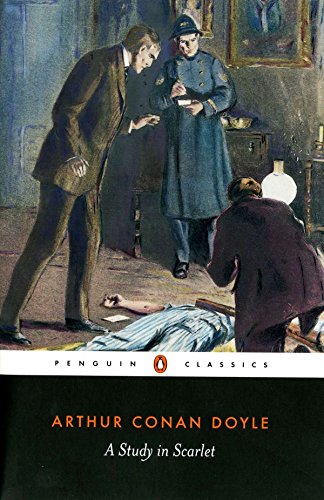 "[Holmes] is probably the only literary creation since the creations of Dickens which has really passed into the life and language of the people."--G. K. Chesterton

Sir Arthur Conan Doyle's A Study in Scarlet is the literary debut of the world's most famous fictional detective, Sherlock Holmes, introduced by Iain Sinclair with notes by Ed Glinert in Penguin Classics.

Convalescing in London after a disastrous experience of war in Afghanistan, Dr John Watson finds himself sharing rooms with his enigmatic new acquaintance, Sherlock Holmes. But their quiet bachelor life at 221B Baker Street is soon interrupted by the grisly discovery of a dead man in a grimy 'ill-omened' house in south-east London, his face contorted by an expression of horror and hatred such as Watson has never seen before. On the wall, the word rache - German for 'revenge' - is written in blood, yet there are no wounds on the victim or signs of a struggle. Watson's head is in a whirl, but the formidable Holmes relishes this challenge to his deductive powers, and so begins their famous investigative partnership.

In his introduction, Iain Sinclair discusses the links between Sherlock Holmes mysteries and the Jack the Ripper murders, Conan Doyle's narrative style and his depiction of London. This edition also includes further reading, a chronology and notes.

Sir Arthur Conan Doyle (1859-1930) was born in Edinburgh where he qualified as a doctor, but it was his writing which brought him fame, with the creation of Sherlock Holmes, the first scientific detective. He was also a social reformer who used his investigative skills to prove the innocence of individuals.

Iain Sinclair is the author of Downriver (winner of the James Tait Black Memorial Prize and the Encore Award), and his latest book Ghost Milk: Calling Time on the Grand Project is published by Penguin.

Ed Glinert writes a regular column for Time Out magazine, and is the author of The Literary Guide to London. Glinert's latest book, The London Compendium, is published by Penguin.

If you liked A Study in Scarlet you might enjoy The Hound of the Baskervilles, also available in Penguin Classics.

1. A Study in Scarlet (Penguin Classics)