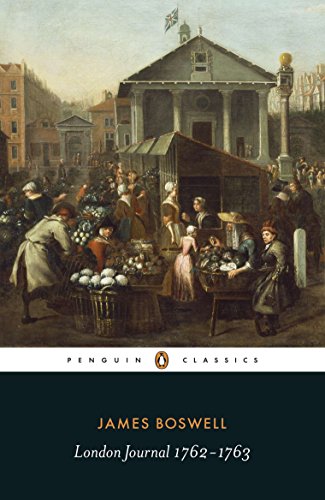 Edinburgh-born James Boswell, at twenty-two, kept a daily diary of his eventful second stay in London from 1762 to 1763. This journal, not discovered for more than 150 years, is a deft, frank and artful record of adventures ranging from his vividly recounted love affair with a Covent Garden actress to his first amusingly bruising meeting with Samuel Johnson, to whom Boswell would later become both friend and biographer. The London Journal 1762-63 is a witty, incisive and compellingly candid testament to Boswell's prolific talents.

James Boswell (1740-1795) was a lawyer, diarist, and author born in Edinburgh. He is best known as the biographer of Samuel Johnson. Boswell is known for taking voracious notes on the grand tour of Europe that he took as a young nobleman and, subsequently, of his tour to Scotland with Johnson. He also recorded meetings and conversations with eminent individuals belonging to The Club, including David Garrick, Edmund Burke, Joshua Reynolds and Oliver Goldsmith.

Gordon Turnbull graduated with first class honours at the Australian National University, and took his Ph. D. at Yale.He taught in the English Departments of the University of Newcastle (New South Wales), Yaleand Smith College, and succeeded as General Editor of the Yale Editions of the Private Papers of James Boswell in 1997.