Verwandte Artikel zu Introduction to Programming in Python: An Interdisciplinary...

Introduction to Programming in Python: An Interdisciplinary Approach 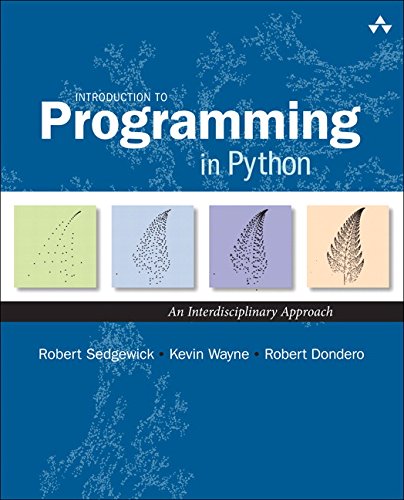 Today, anyone in a scientific or technical discipline needs programming skills. Python is an ideal first programming language, and Introduction to Programming in Python is the best guide to learning it. Princeton University's Robert Sedgewick, Kevin Wayne, and Robert Dondero have crafted an accessible, interdisciplinary introduction to programming in Python that emphasizes important and engaging applications, not toy problems. The authors supply the tools needed for students to learn that programming is a natural, satisfying, and creative experience. This example-driven guide focuses on Python's most useful features and brings programming to life for every student in the sciences, engineering, and computer science. Coverage includes Basic elements of programming: variables, assignment statements, built-in data types, conditionals, loops, arrays, and I/O, including graphics and sound Functions, modules, and libraries: organizing programs into components that can be independently debugged, maintained, and reused Object-oriented programming and data abstraction: objects, modularity, encapsulation, and more Algorithms and data structures: sort/search algorithms, stacks, queues, and symbol tables Examples from applied math, physics, chemistry, biology, and computer science-all compatible with Python 2 and 3 Drawing on their extensive classroom experience, the authors provide Q&As, exercises, and opportunities for creative practice throughout. An extensive amount of supplementary information is available at introcs.cs.princeton.edu/python. With source code, I/O libraries, solutions to selected exercises, and much more, this companion website empowers people to use their own computers to teach and learn the material.

Robert Sedgewick is the William O. Baker professor of computer science at Princeton University. He has held visiting research positions at several advanced research laboratories and serves on the Adobe Systems board. He is also the coauthor (with Kevin Wayne) of Introduction to Programming in Java and Algorithms, Fourth Edition (both from Addison-Wesley). Kevin Wayne is the Phillip Y. Goldman senior lecturer in computer science at Princeton University, where he has taught since 1998. He is an ACM Distinguished Educator and holds a Ph.D. in operations research and industrial engineering from Cornell University. Robert Dondero is a lecturer in computer science at Princeton University. He has taught there since 2001, earning eight excellence in engineering education awards, and a lifetime achievement award for excellence in teaching. He holds a Ph.D. in information science and technology from Drexel University.

1. Introduction to Programming in Python : An Interdisciplinary Approach

Buchbeschreibung Addison Wesley Jun 2015, 2015. Buch. Zustand: Neu. Neuware - Introduction to Programming in Python: An Interdisciplinary Approach emphasizes interesting and important problems, not toy applications. The authors focus on Python's most useful and significant features, rather than aiming for exhaustive coverage that bores novices. All of this book's code has been crafted and tested for compatibility with both Python 2 and Python 3, making it relevant to every programmer and any course, now and for many years to come. 792 pp. Englisch. Artikel-Nr. 9780134076430