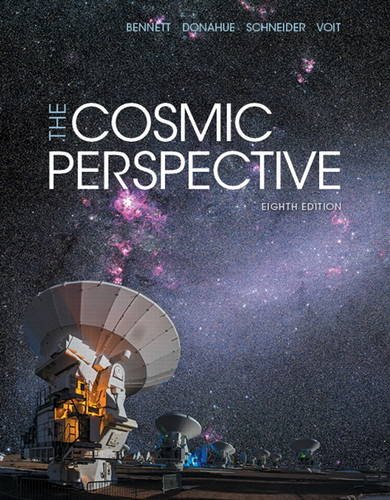 For two-semester courses in astronomy. Teaching the Process of Science through Astronomy Building on a long tradition of effective pedagogy and comprehensive coverage, The Cosmic Perspective, Eighth Edition provides a thoroughly engaging and up-to-date introduction to astronomy for non-science majors. This text offers a wealth of features that enhance student understanding of the process of science and actively engage students in the learning process for key concepts. The fully updated Eighth Edition includes the latest scientific discoveries, revises several subjects based on our most current understanding of the cosmos, and now emphasizes deeper understanding of the twists and turns of the process of science and the relevance of concepts to student's lives. This text is also available in two volumes, which can be purchased separately: The Cosmic Perspective: The Solar System, Eighth Edition (includes Chapters 1-13, 14, S1, 24) The Cosmic Perspective: Stars, Galaxies, and Cosmology, Eighth Edition (includes Chapters 1-3, S1, 4-6, S2-S4, 14-24) Also available with MasteringAstronomy MasteringAstronomy from Pearson is the leading online homework, tutorial, and assessment system, designed to improve results by engaging students before, during, and after class with powerful content. Instructors ensure students arrive ready to learn by assigning educationally effective content before class, and encourage critical thinking and retention with in-class resources. Students can further master concepts after class through homework assignments that provide interactivity, hints and answer-specific feedback. The Mastering gradebook records scores for all automatically graded assignments in one place, while diagnostic tools give instructors access to rich data to assess student understanding and misconceptions. Mastering brings learning full circle by continuously adapting to each student and making learning more personal than ever-before, during, and after class. Note: You are purchasing a standalone product; MasteringAstronomy does not come packaged with this content. Students, if interested in purchasing this title with MasteringAstronomy, ask your instructor for the correct package ISBN and Course ID. Instructors, contact your Pearson representative for more information. If you would like to purchase boththe physical text and MasteringAstronomy, search for: 0134058291 / 9780134058290 Cosmic Perspective Plus MasteringAstronomy with eText -- Access Card Package, The Package consists of: 0134059069 / 9780134059068 Cosmic Perspective, The 0134080572 / 9780134080574 MasteringAstronomy with Pearson eText -- ValuePack Access Card -- for The Cosmic Perspective 0321765184 / 9780321765185 SkyGazer 5.0 Student Access Code Card (Integrated component)

Jeffrey Bennett, a recipient of the American Institute of Physics Science Communication Award, holds a B.A. in biophysics (UC San Diego) and an M.S. and Ph.D. in astrophysics (University of Colorado). He specializes in science and math education and has taught at every level from preschool through graduate school. Career highlights including serving 2 years as a visiting senior scientist at NASA headquarters, where he developed programs to build stronger links between research and education, and proposing and helping to develop the Voyage scale model solar system on the National Mall (Washington, DC). He is the lead author of textbooks in astronomy, astrobiology, mathematics, and statistics, and of critically acclaimed books for the public including Beyond UFOs (Princeton University Press, 2008/2011), Math for Life (Big Kid Science, 2014), What Is Relativity? (Columbia University Press, 2014), and On Teaching Science (Big Kid Science, 2014). In 2014, his five children's books (Max Goes to the Space Station, Max Goes to the Moon, Max Goes to Mars, Max Goes to Jupiter, and The Wizard Who Saved the World) became the first books launched to the International Space Station for the Story Time From Space program. He and his family live in Boulder, Colorado. His personal website is www.jeffreybennett.com. Megan Donahue is a professor in the Department of Physics and Astronomy at Michigan State University and a Fellow of the American Association for the Advancement of Science. Her current research is mainly about using X-ray, UV, infrared, and visible light to study clusters of galaxies: their contents-dark matter, hot gas, galaxies, active galactic nuclei-and what they reveal about the contents of the universe and how galaxies form and evolve. She grew up on a farm in Nebraska and received an S.B. in physics from MIT, where she began her research career as an X-ray astronomer. She has a Ph.D. in astrophysics from the University of Colorado. Her Ph.D. thesis on theory and optical observations of intergalactic and intracluster gas won the 1993 Trumpler Award from the Astronomical Society for the Pacific for an outstanding astrophysics doctoral dissertation in North America. She continued postdoctoral research as a Carnegie Fellow at Carnegie Observatories in Pasadena, California, and later as an STScI Fellow at Space Telescope. Megan was a staff astronomer at the Space Telescope Science Institute until 2003, when she joined the MSU faculty. Megan is married to Mark Voit, and they collaborate on many projects, including this textbook and the raising of their children, Michaela, Sebastian, and Angela. Between the births of Sebastian and Angela, Megan qualified for and ran the Boston Marathon. These days, Megan runs trails, orienteers, and plays piano and bass guitar whenever her children allow it. Nicholas Schneider is an associate professor in the Department of Astrophysical and Planetary Sciences at the University of Colorado and a researcher in the Laboratory for Atmospheric and Space Physics. He received his B.A. in physics and astronomy from Dartmouth College in 1979 and his Ph.D. in planetary science from the University of Arizona in 1988. In 1991, he received the National Science Foundation's Presidential Young Investigator Award. His research interests include planetary atmospheres and planetary astronomy. One research focus is the odd case of Jupiter's moon Io. Another is the mystery of Mars's lost atmosphere, which he hopes to answer by serving as science lead on the Imaging UV Spectrograph on NASA's MAVEN mission. Nick enjoys teaching at all levels and is active in efforts to improve undergraduate astronomy education. In 2010, he received the Boulder Faculty Assembly's Teaching Excellence Award. Off the job, Nick enjoys exploring the outdoors with his family and figuring out how things work. Mark Voit is a professor in the Department of Physics and Astronomy and Associate Dean for Undergraduate Studies in the College of Natural Science at Michigan State University. He earned his A.B. in astrophysical sciences at Princeton University and his Ph.D. in astrophysics at the University of Colorado in 1990. He continued his studies at the California Institute of Technology, where he was a research fellow in theoretical astrophysics, and then moved on to Johns Hopkins University as a Hubble Fellow. Before going to Michigan State, Mark worked in the Office of Public Outreach at the Space Telescope, where he developed museum exhibitions about the Hubble Space Telescope and helped design NASA's award-winning HubbleSite. His research interests range from interstellar processes in our own galaxy to the clustering of galaxies in the early universe, and he is a Fellow of the American Association for the Advancement of Science. He is married to coauthor Megan Donahue, and cooks terrific meals for her and their three children. Mark likes getting outdoors whenever possible and particularly enjoys running, mountain biking, canoeing, orienteering, and adventure racing. He is also author of the popular book Hubble Space Telescope: New Views of the Universe.