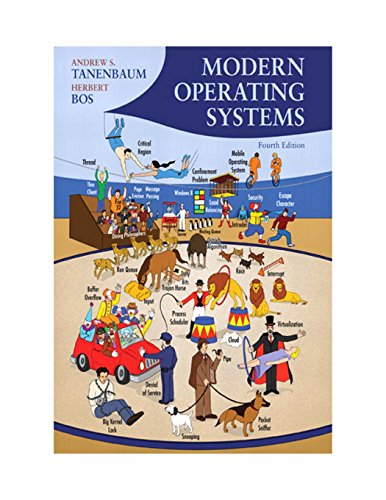 Modern Operating Systems, Fourth Edition, is intended for introductory courses in Operating Systems in Computer Science, Computer Engineering, and Electrical Engineering programs. It also serves as a useful reference for OS professionals ? The widely anticipated revision of this worldwide best-seller incorporates the latest developments in operating systems (OS) technologies. The Fourth Edition includes up-to-date materials on relevant?OS. Tanenbaum also provides information on current research based on his experience as an operating systems researcher. ? Modern Operating Systems, Third Editionwas the recipient of the 2010 McGuffey Longevity Award. The McGuffey Longevity Award recognizes textbooks whose excellence has been demonstrated over time.?http://taaonline.net/index.html ?? Teaching and Learning Experience This program will provide a better teaching and learning experience-for you and your students. It will help: ? Provide Practical Detail on the Big Picture Concepts: A clear and entertaining writing style outlines the concepts every OS designer needs to master.Keep Your Course Current: This edition includes information on the latest OS technologies and developmentsEnhance Learning with Student and Instructor Resources: Students will gain hands-on experience using the simulation exercises and lab experiments.

Andrew S. Tanenbaum has an S.B. degree from M.I.T. and a Ph.D. from the University of California at Berkeley. He is currently a Professor of Computer Science at the Vrije Universiteit in Amsterdam, The Netherlands. He was formerly Dean of the Advanced School for Computing and Imaging, an interuniversity graduate school doing research on advanced parallel, distributed, and imaging systems. He was also an Academy Professor of the Royal Netherlands Academy of Arts and Sciences, which has saved him from turning into a bureaucrat. He also won a prestigious European Research Council Advanced Grant. In the past, he has done research on compilers, operating systems, networking, local-area distributed systems and wide-area distributed systems that scale to a billion users. His main focus now is doing research on reliable and secure operating systems. These research projects have led to over 140 refereed papers in journals and conferences. Prof. Tanenbaum has also authored or co-authored five books. The books have been translated into languages, ranging from Basque to Thai and are used at universities all over the world. Prof. Tanenbaum has also produced a considerable volume of software, notably MINIX, a small UNIX clone. It was the direct inspiration for Linux and the platform on which Linux was initially developed. The current version of MINIX, called MINIX 3, is now focused on being an extremely reliable and secure operating system. Prof. Tanenbaum will consider his work done when no computer is equipped with a reset button. and no user has any idea what an operating system crash is. MINIX 3 is an on-going open-source project to which you are invited to contribute. Go to www.minix3.org to download a free copy and find out what is happening. Prof. Tanenbaum's Ph.D. students have gone on to greater glory after graduating. He is very proud of them. In this respect he resembles a mother hen. Tanenbaum is a Fellow of the ACM, a Fellow of the IEEE, and a member of the Royal Netherlands Academy of Arts and Sciences. He has also won numerous scientific prizes from ACM, IEEE, and USENIX. If you are really curious about them, see his page on Wikipedia. He also has two honorary doctorates. Herbert Bos obtained his master degree from Twente University and his Ph.D. from Cambridge University Computer Laboratory in the UK. Since then, he has worked extensively on dependable and efficient I/O architectures for operating systems like Linux, but also research systems based on MINIX 3. He currently a professor in Systems and Network Security in the department of Computer Science at the Vrije Universiteit in Amsterdam, the Netherlands. His main research field is that of system security. With his students, he works on novel ways to detect and stop attacks, to analyze and reverse engineer malware, and to take down botnets (malicious infrastructures that may span millions of computers). In 2011, he obtained an ERC Starting Grant for his research on reverse engineering. Several of his students have won the Roger Needham Ph.D. Award for best Ph.D. thesis in systems in Europe.